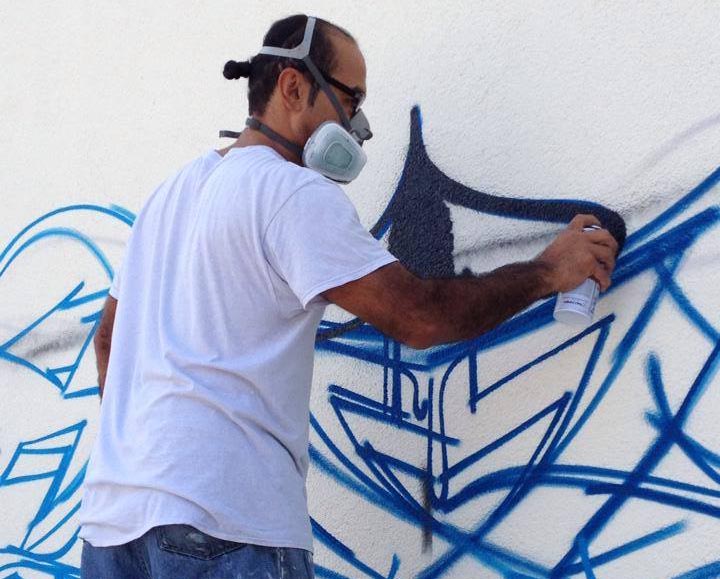 On the occasion of the annual

International Meeting of Styles in nearby Wiesbaden, the American tagger Mario Gonzalez a.k.a. Zore and his two German counterparts Manuel Gerullis a.k.a. Yours and Sebastian Schmidt a.k.a RZM brought some of the atmosphere at the world’s biggest graffiti festival to the consulate grounds on June 11. In the run-up to the annual festival the artists were invited to design a mural at the U.S. Consulate General Frankfurt representing the ongoing German-American friendship.  A German golden eagle and an American bald eagle symbolically face each other with their respective flags in the background that are joined by graffiti letters.  Members of staff going about their business paused in awe as the mural took shape.  “I’m proud to work here, because we always do these amazing projects that appeal to young people and adults alike”, said one stunned employee.

PA Frankfurt is partnering with the festival and its artists to arouse young people’s interest in American culture and to celebrate a form of art that not only combines the traditions of hip hop and graffiti writing, but also peacefully connects people from various backgrounds without reference to race, religion or politics. The following day, students from the DoDEA American High School and the German Humboldt-Schule Wiesbaden were invited to participate in a workshop on the basics of graffiti under the leadership of  Rahman Statik, another Chicago artist participating in the Meeting of Styles.  Painting together, the teenagers would not only learn more about graffiti, but would also collaborate, exchange ideas, and even become friends.  Rahman, Statik was amazed at how professional and engaged the students were: “They were in their zones, helping each other and making great graffiti art, which they had never done before.” The results were all the more impressive.  All participants were clearly satisfied with their work as students applauded each other’s pieces and connected after the event had ended.  Teachers were so impressed with the group dynamics at the workshop that the attending German teacher formally invited the American participants to spend one day at their school in Wiesbaden.  There they will learn more about their respective educational systems and continue this fruitful transatlantic exchange.

Over the weekend more than 100 graffiti and hip hop artists from all corners of the world gathered for the International Meeting of Styles 2014 at an underground passage beneath rail tracks in Mainz-Kastel.  For three days, the festival drew large crowds who come to admire the artwork, the catchy rhythms of rappers, and the typically regional food and drink.  Every year the festival attracts more artists from ever more diverse backgrounds with this year’s event featuring not only a number of American artists but also an Iranian artist and former political prisoner.  Most important, however, remains the diversity of styles that distinguishes but also links artists as Public Affairs Officer Jeffrey Hill emphasizes: “U.S. Mission Germany’s support of the International Meeting of Styles in Wiesbaden hits many public-diplomacy grace notes:  especially the power of art to bridge cultures, share US-German and universal values, and – maybe above all – show how people of all ages, backgrounds, and orientations come together to celebrate diversity and freedom of expression.” Photos