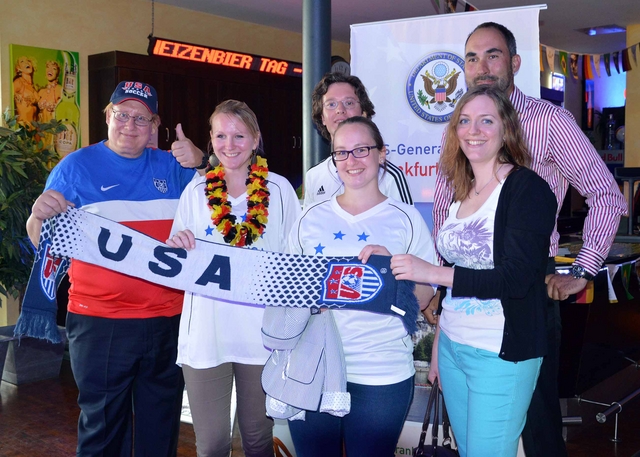 The Consulate cosponsored a viewing of the United States-Germany World Cup soccer match at Magic Bowl, a bowling alley in Oberursel. The friendly and festive event was attended by Consul General Kevin C. Milas, alumni of the Embassy’s Parliamentary Partnership Program, legendary German sports reporter Rolf Töpperwien, and employees, families, and friends of the Consulate. The event was organized by Christoph Schwarzer and his wife Heike Schwarzer, the owners of Magic Bowl. Mr. Schwarzer works as a volunteer firefighter in Germany and has risen over €1 million for family members of New York firefighters who lost their lives in the attacks of September 11th. Those in attendance enjoyed watching the thrilling and close match on a large HD television screen, kids had fun bowling and playing arcade games, and lively and spirited conversations – in both German and English – could be heard throughout the premises. Many members of the local press were in attendance, and CG Milas gave several interviews, predicting with great optimism a positive result in the United States’ favor. Friends and family gasped and cheered throughout the exciting match, all while enjoying the wonderful hospitality of the Magic Bowl staff. And while Germany did indeed win the match, the real winner of the evening was in fact the delicious German-American barbeque! Photos