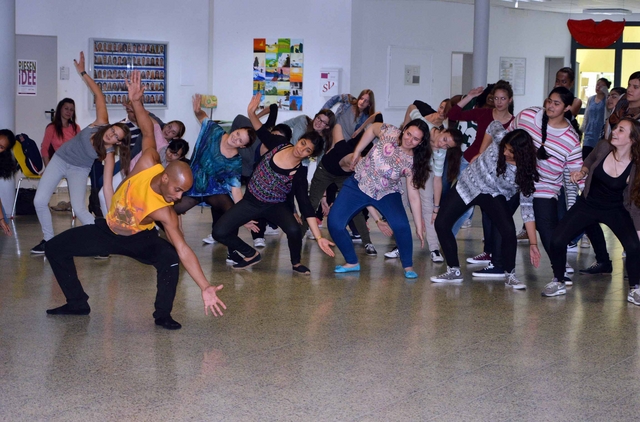 On the occasion of the Frankfurt tour stop of the Alvin Ailey Dance Theater from July 2 through July 6, the PA Team invited dancers from the ensemble to conduct dance workshops at two local high schools. As Alvin Ailey always strove to celebrate ethnic diversity through dance, it was particularly fitting that the two schools chosen both featured classes with very diverse student bodies. On July 1, 38-year-old Vernard J. Gilmore, who has been working with the company for 17 years, was enthusiastically welcomed at Ernst-Reuter-Schule. He first explained to his audience of more than 50 students of various ages the history of Alvin Ailey and his dance company based in New York. He emphasized that Mr. Ailey wanted his ensemble to be different from other dance companies of that time, and that he wanted to found an ensemble combining various different types of dance. Today, the company is well in its 55th season and is known across the globe.

After Gilmore’s brief introduction, he surprised the students by asking everyone to clear the room and stand up. Before the dancing began, however, Gilmore led students in a unique warm-up, and even challenged his audience by asking questions such as, “What connects my body to the floor?” or “Where do my arms come from?” This, according to Gilmore, would give the students a better awareness of their bodies. He explained that dancing requires ‘listening’ to one’s posture. The unusual exercises served as an excellent ice breaker and led even senior teachers to participate. After the initial warm-up, Gilmore began explaining the actual choreography to the students. He stressed that dancing is not about performing complicated moves, since the ‘body loves simplicity;’ rather, it is about expressing oneself. “People have so much more to say, like where they come from, or what they would like to achieve in their lives,” the experienced dancer said. For him, dancing acts as a universal language that has the ability to convey abstract ideas such as our inner selves. Through a choreography taken from Alvin Ailey’s famous ‘Revelations,’ he succeeded in demonstrating just that. He showed the students that they could express their identities by the means of dancing.

Another highlight of Mr. Gilmore’s dance class was his ‘all-boys’ choreography. As male dancers are still underrepresented today, he emphasized the importance of masculine expression. While the 10 boys participating were weary of his intentions at first, they soon found themselves doing fist punches and kicks along to the rhythm. It was Mr. Gilmore’s engaging approach that convinced even male teenagers that dancing was not only reserved to girls but can be an activity for anybody. The class ended with both a performance of both choreographies and a short Q&A session.

The same outreach format was applied by Ailey dancer Glenn Allen Sims at Neues Gymnasium in Ruesselsheim. Mr. Sims discussed his struggles with self-doubt and self-consciousness prior to auditioning for the prestigious Juilliard School. After successfully being admitted to Juilliard, Mr. Sims’ attitudes about himself changed quickly. He developed a sense of self-confidence and learned to embrace pre-performance anxiety, something that he previously struggled with. Students asked Mr. Sims if he ever still feels nervous prior to performing. His answer, which surprised the students, was a resounding “yes!” He explained that one should not “ignore” nerves, stress, or anxiety. This, he claims, is impossible. Instead, one should learn how to take this negative anxiety and transform it into positive energy. Being nervous is being human, and what could be more human than dancing? Mr. Sims has now been with the Alvin Ailey American Dance Theater for almost 20 years, and he has traveled and toured extensively around the world with the company. Photos: Ernst-Reuter-Schule, Neues Gymnasium