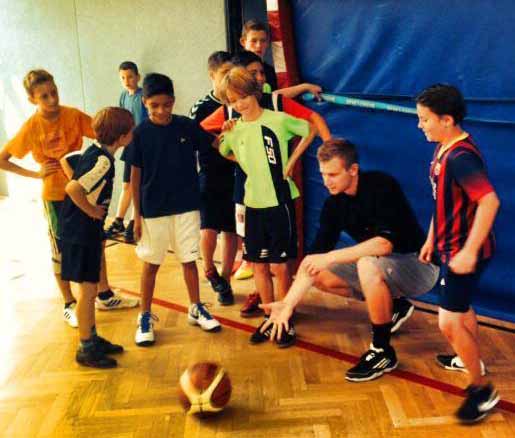 During the school summer break, our consulate teamed up with various youth sports clubs in the Frankfurt region and supported their holiday sports activities for kids from August 4 – 14.  Consular officer Ladonna Sales and consulate intern Jack Stevens – athletes themselves – joined American coaches at an “American Sports Camp” under the patronage of Consul General Kevin Milas for almost a hundred German teenage kids, promoting basketball, baseball, lacrosse, and American football while at the same time highlighting interpersonal skills like sportsmanship, integrity, and teamwork.  CG Milas himself threw the ceremonial first pitch at a First Division Baseball game that was followed by a baseball summer camp of the local club “Bad Homburg Hornets,” featuring several American players.

The shared enthusiasm for sports and exercise immediately broke the ice with the young audience at all those events.  They were stunned to see American diplomats in sports jerseys rather than suits and ties, engaging with them in their favorite pastime.  Both sides enjoyed the interaction immensely, and the kids’ curiosity was sparked as to what else the consulate has to offer.

More about our other events for the young (and not so young 🙂 on our Facebook page at https://www.facebook.com/usconsulate.frankfurt