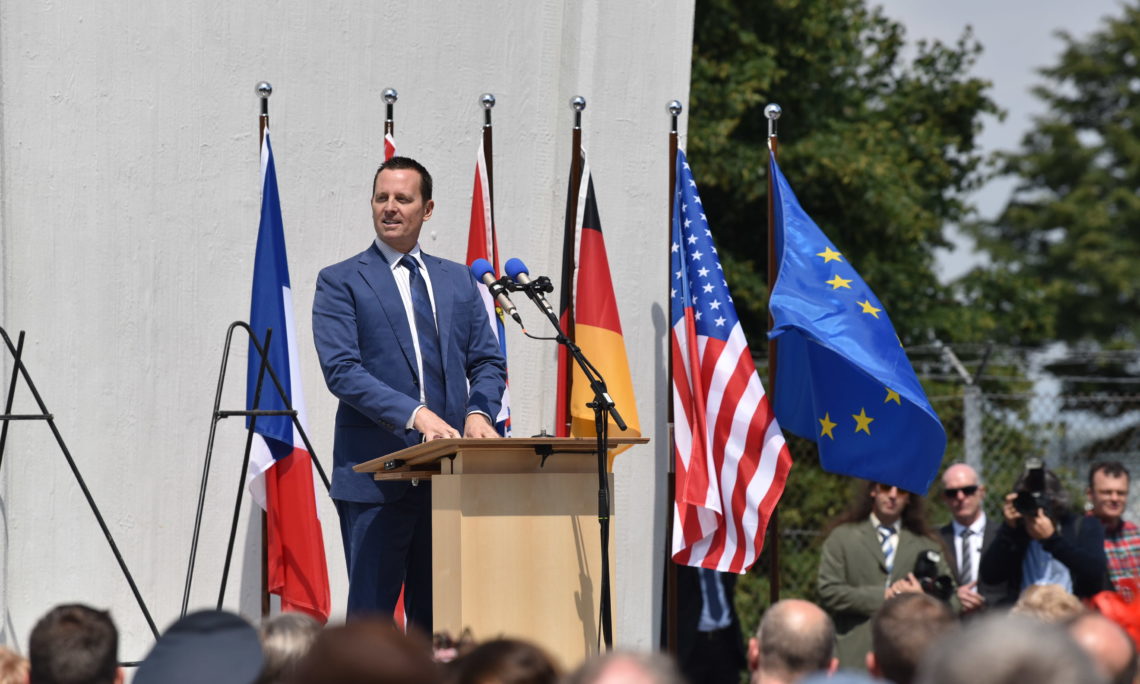 Minister-President Bouffier, it is an honor to join you in commemorating the Berlin Airlift.

70 years ago today, and continuing during the ensuing months, food and fuel was loaded on aircrafts bound for Berlin every two to three minutes. The logistics work went on around the clock in it what would later be called the first battle of the Cold War.

The decision made by President Truman to support the Airlift was difficult and not universally popular. But Truman had resolve.

The story of the Airlift is now, however, about the people that made it happen.

People like the famous “Candy Bomber” Gail Halvorsen whose daughters, Denise Williams and Marilyn Sorensen, are with us today.  We welcome them and remind them that their father is a hero.

The Airlift was an enormous undertaking; and it was not without danger.  No matter the weather or conditions on the ground, around the clock, the flights went on. This memorial is dedicated to those who lost their lives in this historic and vitally important act of bravery.

The heroes of the Airlift came from many countries.  They wore the uniforms of the Air Forces of the United States, the United Kingdom, France, Canada, Australia, New Zealand, and South Africa.  Military and civilians, of many different nationalities, all shared the same goal: to ensure the survival of Berlin in the face of a Russian blockade.

President Truman simply said, “There is no discussion on this point.  We are going to stay – period.”

It was an ambitious plan, never before attempted on this scale and it was unclear whether it would work.

But when Lucius D. Clay, the Military Governor of Berlin, asked his team about the feasibility of an airlift, the answer was again one of resolve: “We can carry anything, anywhere, anytime.”

And they did, thanks to the Allied pilots –people like Gail Halvorsen and the German mechanics they depended on.

The American people, too, demonstrated their resolve through their generosity.  Their tax dollars paid for the strategy and they personally sent CARE packages delivered via the Airlift planes.

Through the Allied forces resolve, Berliners learned to hope again; and did all that they could to support the effort.

This airport here in Frankfurt will go down in history because of the role it played during the Berlin Airlift.  It was also the ‘Gateway to Europe’ for hundreds of thousands of service members and their families.

Over the past seven decades, over 15 million Americans have lived in Germany, more than in any other country overseas. The great majority of these Americans have served in the U.S. military – working to protect the Transatlantic Alliance and united against shared threats to our people’s safety and security.

What might have happened if the West had not responded so emphatically to the Berlin Blockade by the Russians?  Or if the United States had not helped to jumpstart the economic recovery of Europe through the Marshall Plan?

Our shared commitment to peace and stability is the cornerstone of our relationship.

That same sense of responsibility is still required today.

Germany’s recent decision to increase defense spending to 1.5% of GDP is a good step in implementing the Wales Pledge commitment of spending 2% of GDP.  Nothing is more important than the safety of our children – and we have all come to realize that freedom isn’t free.

The U.S. wants to see a stronger Europe, a more prepared Europe, and therefore a stronger transatlantic alliance.

Thank you to everyone who made the commitment to protect freedom 70 years ago – we all owe you a debt of gratitude.

Suggested for You
TwitterFacebook