Thank you very much for having me. And Thank you to Hillel for organizing this important rally.

Today the United Nations Human Rights Council will convene again to discuss a set of phony allegations against the State of Israel.

I think it speaks to integrity of the Human Rights Council that we already know what the decision will be before they even vote.

Among those deciding whether Israel has violated human rights will be representatives from absolute monarchies, one-party states, and military dictatorships.

I think it speaks to the sincerity of the Human Rights Council that its agenda is determined by those who respect its mandate the least.

There is a reason why this happens in every session, multiple times every year, no matter which countries are elected for membership.

The Human Rights Council has what it calls “Agenda Item 7,” a permanent directive to debate the human rights record of Israel at every council session.

Such a directive does not exist for any other country on the planet.

It speaks to the fundamental flaws of the Human Rights Council that it not only singles out Israel, but does so on a permanent basis.

The belief that a single country and a single people merit such attention on a permanent basis—this belief is motivated by one thing: anti-Semitism.

This is not just a form of bigotry. It is a sign of intellectual and moral decay.

An institution whose entire worldview is dominated by the fear and fantasy of Jewish criminality.

It has lost the ability to be rational, to understand cause and effect, to make positive change.

Like a drug-addiction, anti-Semitism is both a disease and a source of comfort.

In the case of the Human Rights Council, anti-Semitism comes from the belief that the awesome responsibility of promoting human rights consists almost entirely of criticizing one small democracy already struggling to survive.

To pass resolution after resolution on Israel while frequently ignoring China, Cuba, or Russia, is a horrendous hypocrisy in and of itself.

Here in Geneva, Americans from both political parties have raised concerns about the Human Rights Council for years.

Our senior diplomats held well over 100 consultations with delegations from around the world.

When I worked at the U.S. Mission to the UN in New York, we launched a clear roadmap for reform of the Human Rights Council.

But even simple proposals were rejected. In June of 2018, the United States had no other choice but to withdraw its membership and funding.

And perhaps this is just as well. An international human rights council so dedicated to combating a tiny democracy shouldn’t need a very big budget.
Issuing biased reports and damning resolutions on Israel is certainly cost-effective, compared to the kind of work that would be required to actually advance the cause of peace and human rights.

In the meantime, the United States remains the country most engaged and committed to the pursuit of peace between Israel and the Palestinians.

As we speak, the Trump Administration is readying a new plan that will offer a brighter future for all.
We remain clear-eyed about the challenges ahead, but we are committed to working to achieve a future that is more peaceful, prosperous, and secure.

I take no pleasure in the failure and irrelevance of the Human Rights Council.

An international organization which effectively promotes universal human rights would have a place in this world.
After all, there are still human rights violations and abuses occurring around the globe.

So if I may, I’d like to close with a suggestion for how the UN Human Rights Council could win back some of the credibility it’s lost.

It should demand that members abide by the UN’s own Universal Declaration of Human Rights.

It seems like a simple request – to respect human rights before being allowed to judge others.

Among the human rights the Council claims to support are those of women, religious minorities, and LGBT persons.

But 12 member states on the current Human Rights Council explicitly criminalize LGBT status or conduct, including with the death penalty.

Six member states allow the arrest of LGBT persons in the name of combating “indecency.”

In three member states, there are no laws against domestic violence.

And there are more member states than I care to count, where some of the worst forms of violence against women—such as honor killings and female genital mutilation—are widespread.

The United Nations Human Rights Council should live up to the integrity demanded by its mandate: promoting universal respect for the protection of human rights and fundamental freedoms, including women and LGBT persons, without distinction of any kind.

Perhaps then its singular, obsessive focus on the State of Israel – the only democracy in the Middle East – will be exposed for what it is.

U.S. Ambassador to Germany @RichardGrenell addresses our Rally for Equal Rights at the United Nations: "It speaks to the fundamental flaws of the Human Rights Council that it singles out Israel on a permanent basis." #EndItem7 pic.twitter.com/H1MejaMbCG 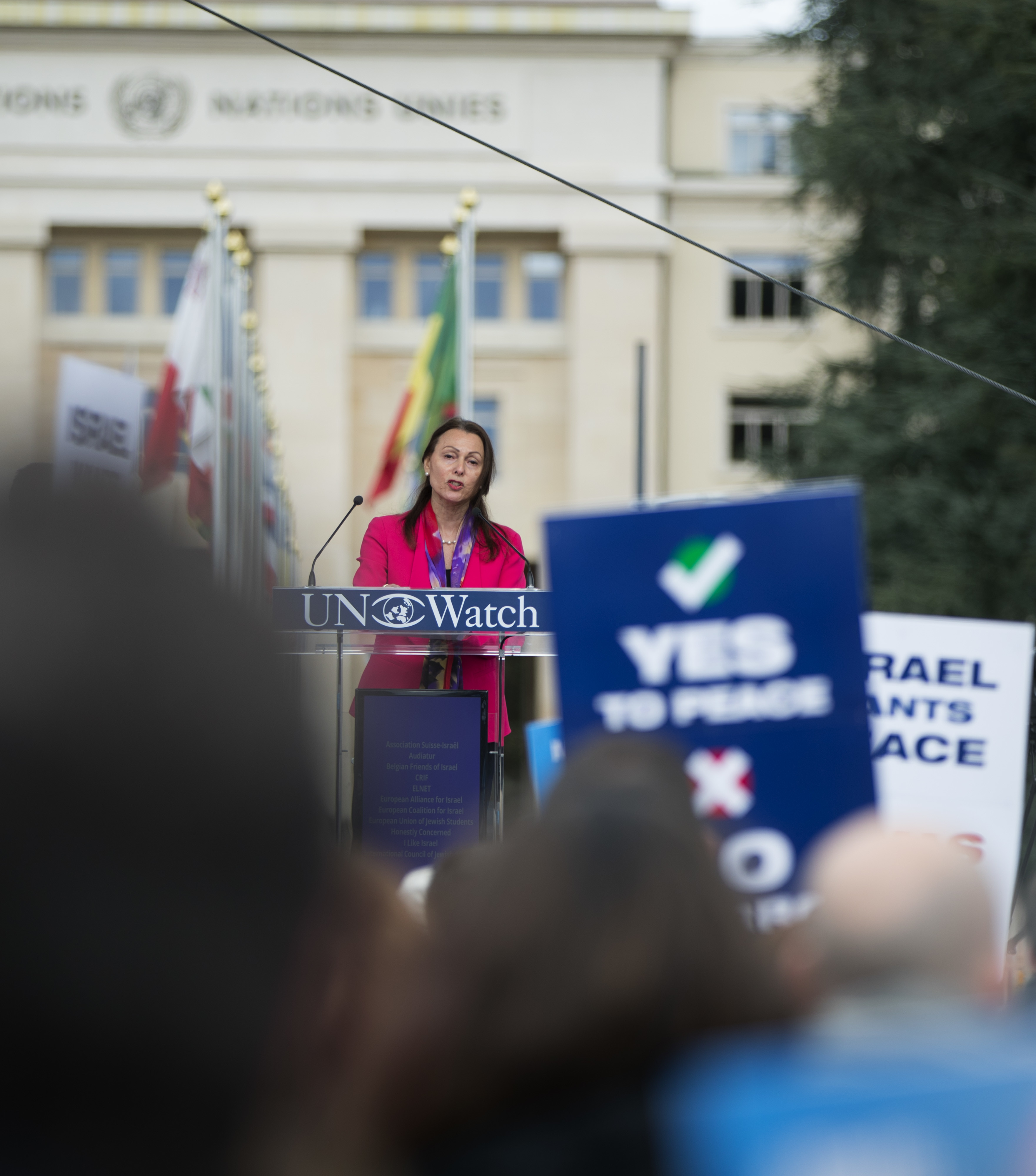 Rally For Equal RIghts at the United Nations: