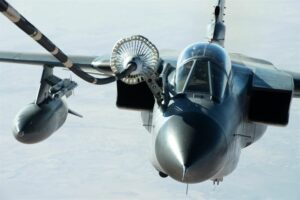 By Richard A. Grenell

US Ambassador to Germany

Before the fall of the Iron Curtain, Germany sat on the front lines of a possible nuclear conflict. So Germany and its NATO Allies came together to strengthen the Alliance’s nuclear deterrence through allied nuclear sharing – a key joint project which protected Germany’s security and strengthened NATO as the world’s most successful multilateral security institution.

Today, Germany sits at the center of a unified Europe, but the threats to Europe’s peace are no “anachronism” as some might have us believe. Russia’s invasion of Ukraine, Russia’s buildup of new nuclear-capable missiles on Europe’s periphery, and new capabilities from China, North Korea, and others make clear the threat is all too present.

Allies expect Germany to remain a “power for peace,” as Foreign Minister Maas recently said. Rather than eroding the solidarity that undergirds NATO’s nuclear deterrent, now is the time for Germany to maintain its commitments to its allies through continued investments in NATO’s nuclear share.

Now is the time for Germany’s political leaders, especially in the SPD, to make clear Germany stands by that commitment and stands by its allies.

Those who seek a stronger voice for Europe on security policy should support a multilateral security umbrella through NATO – and active European investments to shore up its vital deterrence measures.

As leaders said in Warsaw in 2016, “The fundamental purpose of NATO’s nuclear capability is to preserve peace, prevent coercion, and deter aggression.”

As the major nuclear power within NATO, far from seeking nuclear escalation, the United States has consistently reaffirmed these deterrence goals. President Trump has been clear. The Trump Administration’s 2018 Nuclear Posture Review affirmed that the first roles of US nuclear forces are, “[1] Deterrence of nuclear and non-nuclear attack; [and 2] Assurance of allies and partners.”

An honest assessment of the threats we face is essential for our partnership. Our allies in Poland and the Baltics know these threats are not a Cold War relic; no ally can fail to recognize that fact. As NATO leaders from across the Alliance, of every political stripe, reaffirmed when they met most recently in London in December:

“As long as nuclear weapons exist, NATO will remain a nuclear alliance… The strategic forces of the Alliance, particularly those of the United States, are the supreme guarantee of the security of Allies… NATO’s nuclear deterrence posture also relies on United States’ nuclear weapons forward-deployed in Europe and the capabilities and infrastructure provided by Allies concerned. National contributions of dual-capable aircraft to NATO’s nuclear deterrence mission remain central to this effort.”

This is no anachronistic outlook. As much as we all hope for a world free of nuclear weapons, and work toward creating those conditions, the threats we and our allies face have not diminished in recent months or years.

The purpose of NATO’s nuclear share is to keep non-nuclear member states involved in the planning of NATO’s deterrence policy. Germany’s participation in nuclear share ensures that its voice matters.  If Germany seeks to be a true power for peace, now is the time for solidarity. Will Germany bear this responsibility, or will it sit back and simply enjoy the economic benefits of security provided by its other Allies?

German political leaders speak often about the need to look at not only total military spending, but at specific capabilities needed for our collective security.

A credible nuclear deterrent, including through nuclear-capable aircraft, is a core NATO capability. One that remains needed in today’s world, and one that Germany has pledged to contribute to.