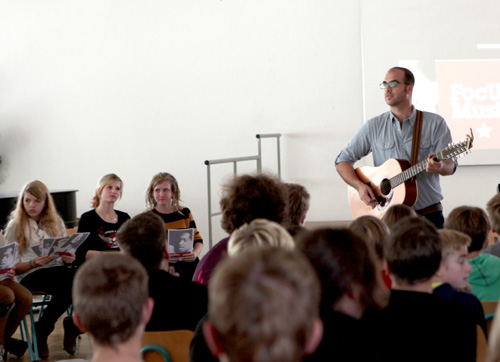 The American musician Ami Yares visited Berlin to hold a number of workshops at several schools in Berlin, Eisenhüttenstadt and Baruth. He was invited by the U.S. Embassy to teach students about the extent and the meaning of the U.S. Civil Rights Movement on the occasion of the 50th anniversary of ”The March on Washington for Jobs and Freedom“, where Martin Luther King Jr. gave his famous “I Have a Dream” speech in August 1963. Back then, hundreds of thousands of Americans protested against racial discrimination in the U.S.

In his workshops, Ami Yares introduced prominent artists and influential songs that were relevant in this movement. By animating the students to sing along, to stamp the beat and to read between the lines of the song lyrics, he created interaction and some interesting discussions. The students learned a lot about the power of music and its impact on people which helped them understand how music can peacefully contribute to dramatic changes within a society.