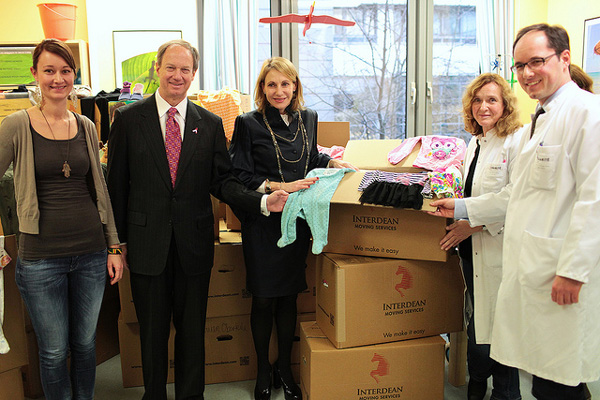 Ambassador Emerson and his wife Kimberly Marteau Emerson visited the Charité Universitätsklinikum Campus Virchow Tagesklinik für Kinder and presented a donation of 31 boxes of clothes collected during an embassy clothing-drive in honor of World Aids Day. Ambassador Emerson stated: “This is an issue that has touched us deeply personally with a number of friends having been afflicted over the years and we have supported Aids organizations personally both at our home in California and here in Berlin.” The director of the clinic, Prof. Dr. Philippe Stock, and Dr. Cornelia Feiterna-Sperling accepted the donation boxes and, joined by other doctors and the social worker of the clinic, informed the Ambassador and his wife about the work of the clinic, which has approximately 60 HIV positive patients who are mostly youths, babies and mothers, many of them stemming from African nations. The clothes will be made available to the patients in need of the Tagesklinik für Kinder.