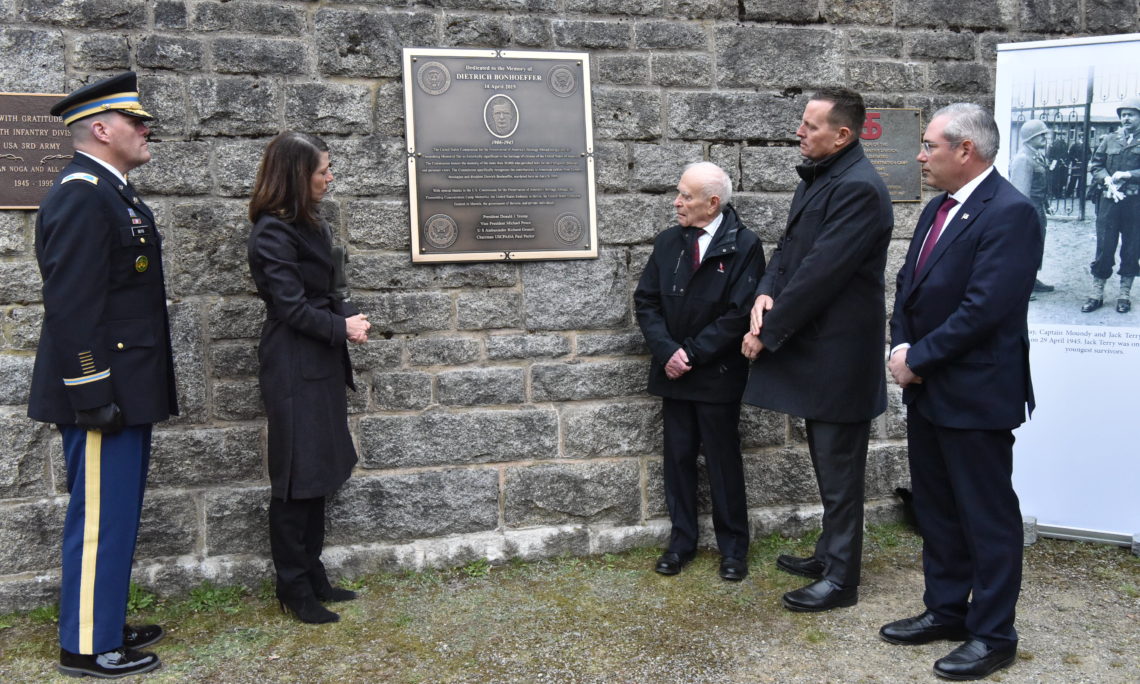 Ambassador Grenell also unveiled a plaque for Dietrich Bonhoeffer, a theologian and anti-Nazi resistance fighter who was murdered in Flossenbürg 74 years ago. #NeverAgain

As prepared for delivery.

Thank you very much. I’m honored to be here today.

I’m especially humbled to be in the presence of my friend, Jack Terry.

Jack grew up in a family of modest means from eastern Poland. After the German invasion in 1939, members of his family were among the victims of the Nazi massacres. When he was 14 years old, Jack was imprisoned here at Flossenbürg in 1944.

In the spring of 1945, with the Americans closing in, the Nazis evacuated Flossenbürg, leaving Jack hiding in an underground ventilation tunnel until the camp was liberated by the United States Army.

He was the youngest survivor of Flossenbürg, and the only survivor in his family. At 15 years old, he was alone in the world. “I just wanted to be wanted,” he told me.

Jack, we can all say to you today: You are not only wanted. You are needed.

Jewish law teaches that to destroy a human life is to destroy a world. 74 years ago, there were 100,000 human lives imprisoned at Flossenbürg, and 30,000 worlds which were destroyed.

No words can capture what took place here between May 1938, when the construction of a concentration camp was ordered by Heinrich Himmler, and April 1945, when it was liberated by the 97th Infantry Division of the United States Army.

I will not try to repeat what has been said before by the thousands of men and women who were touched by what happened here.

What I can do is share the life of one of the prisoners who died at Flossenbürg, and how his life, and his world, touched mine.

Dietrich Bonhoeffer was a pastor and theologian from Breslau. In 1933 he became one of the earliest opponents of Hitler, fighting against the Nazi racial theories of Jews.

In 1939, Bonhoeffer spurned the opportunity to remain in the United States as a refugee, returning to Germany to personally help Jews escape to Switzerland.

During the war he worked underground for the resistance movement, and was eventually linked to the attempt on Hitler’s life.

He was arrested and imprisoned at Flossenbürg. His execution on April 9, 1945 came at the personal behest of Hitler.

When he arrived at Flossenbürg in 1943, Bonhoeffer was already a martyr, having sacrificed his freedom for his convictions, but he still asked himself a remarkable question: “Am I really what others say I am? / Or am I just what I know of myself?”

In the summer of 1944, ten months before he was executed at the age of 39, he offered an answer:

“Daring to do what is right,” he wrote, “not what fancy may tell you, valiantly grasping occasions, not cravenly doubting / freedom comes only through deeds, not through thoughts taking wing.”

The mark of a true prophet is that his teachings remain relevant through the ages, once the context and circumstances of his own era have long since disappeared.

68 years after Bonhoeffer’s death, 6,000 miles from Flossenbürg, I underwent treatment for cancer, including six chemotherapies. When I looked for answers—for meaning in the face of death—I reached for Dietrich’s words.

When my family and I confronted the possibility that God may be missing from my life, we reached for the letters of a man who went through his own crisis of faith.

Here are the lessons we learned: Life is not a comfortable event. Faith is tested only in crisis. In what others see as an end, you can find a beginning.

Justice requires mercy, and mercy requires justice. A life of conviction does not wait for applause.

By finding the point where justice meets grace, Dietrich Bonhoeffer found the strength to resist. And by risking death for his convictions, he taught us how to live a fulfilled life.

In a little while we’re going to unveil a new plaque dedicated to the memory of Dietrich Bonhoeffer. I encourage you all to read the plaque in its entirety.

It was made possible by the generosity of Paul Packer and his Commission, President Trump, and Vice President Pence.

The Vice President has shared with me the enormous impact that Bonhoeffer also made on his life, and told me he wishes he could be here with us today.

We’re also unveiling a website dedicated to Pastor Bonhoeffer. This educational tool is provided by Paul, the Commission, and the American people.

Anyone can access it on their smart phone. The site walks you through Flossenbürg, describing major events and providing texts which Pastor Bonhoeffer wrote while he was imprisoned here.