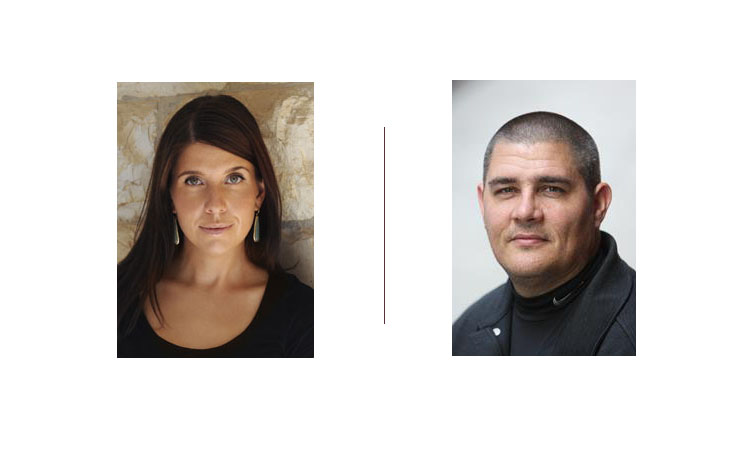 The U.S. Embassy Literature Series concluded its spring program 2017 with two readings by these exciting authors currently based at the American Academy Berlin: Molly Antopol, Mary Ellen von der Heyden Fellow in Fiction, and Adam Johnson, Holtzbrinck Fellow.
Molly Antopol read from her collection of short stories “The UnAmericans” for which she won the “National Book Foundation 5under35” Award, and Adam Johnson read from his short story collection “Fortune Smiles”, which won the 2015 National Book Award.
Our guests, among them many Berlin high school students and their teachers, engaged the authors in lively discussions to learn more about their work.
We thank the American Academy Berlin for the cooperation and are grateful to the staff of the English Theatre Berlin / International Performing Arts Center for being our gracious hosts.The U.S. Embassy Literature Series will continue in the fall.

Molly Antopol – Reading from “The After Party: A Novel in Progress.”

WEDNESDAY, MAY 10, 2017, 20:00
Molly Antopol’s debut story collection, The UnAmericans (W.W. Norton), won the New York Public Library’s Young Lions Fiction Award, a National Book Foundation 5 Under 35 Award, the French-American Prize, the Ribalow Prize and a California Book Award Silver Medal. The book was longlisted for the 2014 National Book Award and was a finalist for the PEN/Robert W. Bingham Prize, the Barnes & Noble Discover Award, the National Jewish Book Award and the Sami Rohr Prize, among others. The book appeared on over a dozen “Best of 2014” lists and will be published in seven countries. Her writing has appeared widely, including in the New York Times, The Wall Street Journal, The New Republic, San Francisco Chronicle, NPR’s All Things Considered and This American Life, online at The New Yorker and in the O.Henry Prize anthology. She’s the recipient of a Wallace Stegner Fellowship at Stanford University, where she teaches creative writing and was a fellow at the Radcliffe Institute for Advanced Study at Harvard. Molly Antopol is currently the Mary Ellen von der Heyden Fellow in Fiction at the American Academy Berlin. She’s at work on a novel, which will also be published by Norton. more »

MONDAY, MAY 15, 2017, 20:00
Adam Johnson is the Phil and Penny Knight Professor in Creative Writing at Stanford University. Winner of a Whiting Award and Fellowships from the Guggenheim Foundation, the National Endowment for the Arts and the American Academy in Berlin, he is the author of several books, including Fortune Smiles, which won the 2015 National Book Award, and the novel The Orphan Master’s Son, which was awarded the 2013 Pulitzer Prize. His fiction has appeared in Esquire, GQ, Playboy, Harper’s Magazine, Granta, Tin House and The Best American Short Stories. His work has been translated into more than thirty languages. Adam Johnson is currently the Holtzbrinck Fellow at the American Academy in Berlin. more »