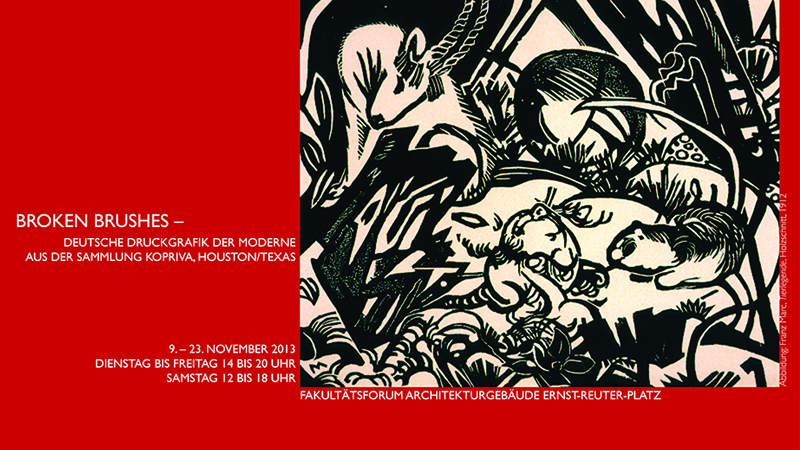 From November 8 to November 23, 2013, the Technical University of Berlin exhibited selected graphic prints of the Kopriva collection, Texas, Houston. On the opening night of the exhibition, TU Berlin’s president, Prof. Jörg Steinbach, welcomed the American art collector Gus Kopriva and acknowledged the 79 exhibits, some of them by renowned artists, such as Otto Dix, Ernst Ludwig Kirchner, Käthe Kollwitz, Lyonel Feininger, Max Beckmann, Wassily Kandinsky, Oskar Kokoschka, Edvard Munch, and George Grosz. Those pieces of art were labeled „degenerate“ during the Nazi regime, leading in many cases to the artists’ forced emigration. The “Broken Brushes” exhibition was part of the theme year “Diversity Destroyed” on the occasion of the 75th anniversary of the pogroms on November 9, 1938. In her speech, the curator Dr. Angelika Jansen, based in San Antonio, Texas, and Berlin, pointed out that the exhibit was shown in many American galleries and universities before it found its way back to Germany. Ms. Katharina Gollner-Sweet, Cultural Attaché of the U.S. Embassy Berlin, stressed the prints’ representation of a tremendously significant artistic period in German history. The U.S. Embassy Berlin-funded opening night was also accompanied by a concert by Fuasi&Ensemble, symbolizing the value of diversity.