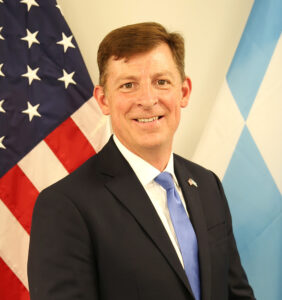 Timothy Liston is the United States Consul General in Munich since the end of July 2021 and has served as a Foreign Service Officer since 2002. Mr. Liston most recently completed a year at National War College, where he earned a Master of Science in National Security Strategy.  Prior to National War College, he served as Deputy Principal Officer at the U.S. Consulate in Ho Chi Minh City from 2016-2020.

From 2013-2016, Mr. Liston worked at the U.S. Permanent Mission to International Organizations in Vienna, where he was Deputy Counselor for International Atomic Energy Agency Affairs, handling peaceful uses of nuclear energy and supporting JCPOA negotiations.  He has also served in Washington in the State Department’s Political-Military Bureau, covering Southeast Asia, and at Embassy Hanoi, focusing on South China Sea, Vietnamese domestic politics, and political-military issues. He was a Trade Officer and Pol-Mil Officer at Embassies Berlin and Vilnius respectively.

Before joining the Foreign Service, Mr. Liston worked at the RAND Corporation and was a Robert Bosch Institute Fellow and a participant in the Bundestag Internship Program.

In addition to his National War College degree, he holds a Masters from Columbia University’s School of International and Public Affairs and a BA from the University of Wisconsin in International Relations and German linguistics. Mr. Liston speaks German, Vietnamese, and Lithuanian.