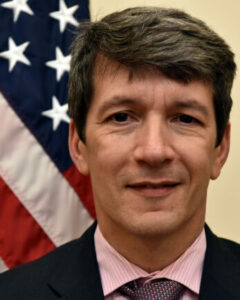 Mr. Gaudiosi is a Senior Foreign Service Officer who assumed his duties as Deputy Principal Officer at the U.S. Consulate in Frankfurt in July, 2020.

Mr. Gaudiosi is a Political Officer and has served as Political Counselor in both Cairo and Budapest.  He has also served overseas in Libya, Bosnia, Italy, and Jordan, as well as in Policy Planning, EUR/RPM, EUR/SCE, and NEA/ARP in the Department.

Mr. Gaudiosi is a native of Philadelphia and a graduate of Emory University.  He attended the Lyndon Baines Johnson School of Public Affairs at the University of Texas before joining the Foreign Service and speaks Italian, Bosnian, Hungarian, Arabic, and German. He is accompanied in Frankfurt by his wife, Dr. Rebecca Gaudiosi, and their daughter.