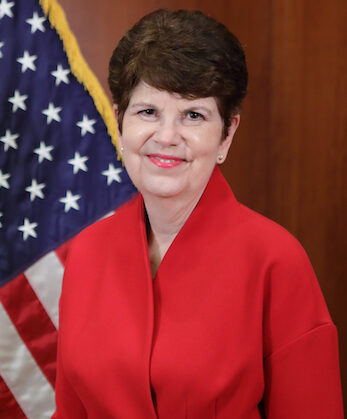 Robin Quinville took up her assignment as Deputy Chief of Mission (DCM) in Berlin in July 2018, and became Chargée d’Affaires a.i. in June 2020. She entered the U.S. Foreign Service in 1988.  After initial assignments in Germany and Washington, she served as a member of the U.S. Delegation to OSCE in Vienna from 1992-1996.  From Vienna, Ms. Quinville was posted to the U.S. Mission to NATO Headquarters in Brussels (1996-1999), where she worked on issues related to NATO enlargement.  Ms. Quinville followed her assignment to Brussels with postings in Cyprus, Bosnia, and Athens; she spent January 2008 to January 2009 in Baghdad as Chief of Staff for Ambassador Charles Ries, the Coordinator for Economic Transition in Iraq.  Following her assignment to Iraq, she was Minister Counselor for Political Affairs at Embassy London (2009-2012) and Embassy Berlin (2012-2015).  Ms. Quinville was Office Director for Western European Affairs at the Department of State from 2015-2017. In 2017-2018 she was a State Department Fellow at the Woodrow Wilson International Center for Scholars.  She holds an M.A. and M. Phil in European History from Columbia University in New York.

Closed on American and German holidays