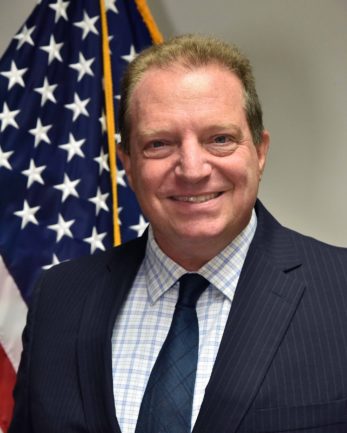 Hailing from Yonkers, New York, David Elmo is a career member of the Senior Foreign Service. He assumed duties as the Deputy Principal Officer at the U.S. Consulate in Frankfurt in mid-August 2017. Frankfurt, with over 1,000 employees, is one of the largest diplomatic entities in the U.S. State Department.

David most recently served as the Management Counselor at the U.S. Embassy in Santo Domingo, the Dominican Republic. His other Foreign Service postings include: La Paz, Bolivia; Milan, Italy; Havana, Cuba; and Nassau, The Bahamas. Prior to joining the Foreign Service, David worked as an International Real Estate Specialist in the State Departments’ Overseas Buildings Office; and before that, in the U.S. Army.

David graduated with a Bachelor of Science degree in Economics from Fordham University in The Bronx, New York. He studied at the London School of Economics and later received Masters Degrees in Real Estate Development from Columbia University (New York), in Management from Webster University (Missouri), and in Strategic Studies from the U.S. Army War College (Pennsylvania).

In addition to being a Foreign Service Officer, David is a recently retired U.S. Army Major General. His last position was as a Deputy Commander at the United States Army in Europe in Wiesbaden, Germany.