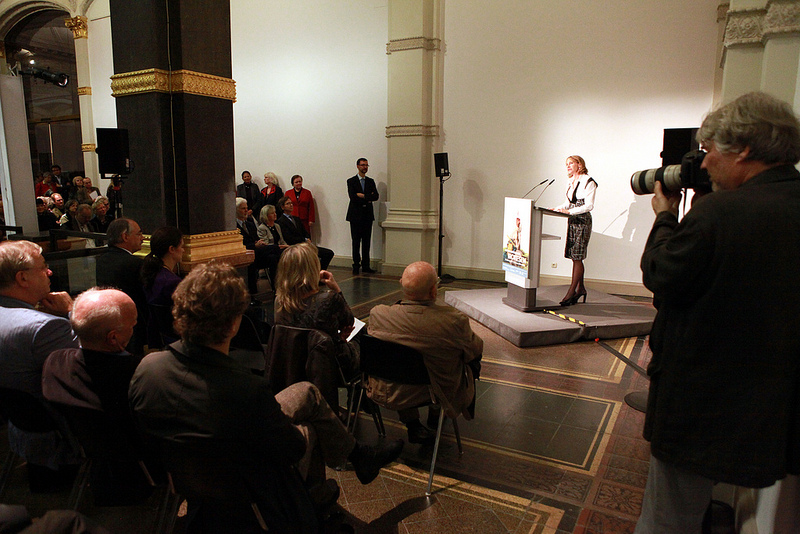 Kimberly Emerson at the Exhibit Opening

Fearsome warriors and gifted diplomats – the Iroquois, originally domiciled in present-day New York state, successfully kept the European colonial armies at bay during the 17th and 18th centuries. At the same time, the formation of their influential intertribal confederacy inspired European intellectual history. The status of women in their society gave momentum to the women’s movement of the 19th century, in the 20th century their hairstyle became a symbol of Punk culture.  With unique items on loan from the U.S., Canada as well as several European museums, the exhibition undertakes for the first time a comprehensive search for the trails of the Iroquois throughout the centuries.  Historical paintings and drawings, precious ethnographic objects, and distinguished examples of Iroquois contemporary art tell their varied history, characterized by war, trade, Christian missions, loss of land, and isolation on reservations.  Likewise addressed, however, is their forceful reassertion of cultural identity in the 20th and 21st centuries.

Kimberly Marteau Emerson, wife of Ambassador Emerson, was one of the speakers who took part in the opening of the exhibit “On the Trails of the Iroquois”—a cooperative project between the Art and Exhibition Hall of the Federal Republic of Germany and the Martin-Gropius-Bau.  This large-scale exhibition aims at portraying the Iroquois people’s continuous creative adaptations to ever-changing living conditions over time, presenting approximately 500 objects on about 1,600 square meters of representative exhibition space.