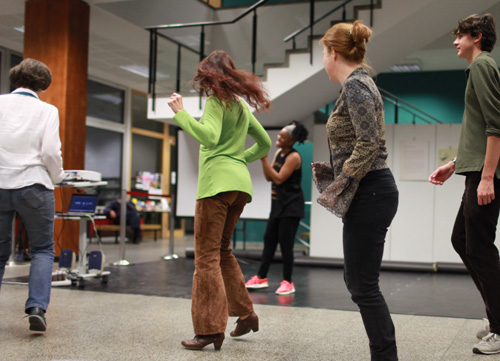 The Embassy hosted  Michele Byrd-McPhee, a Hip-Hop dancer, choreographer and festival organizer.  Ms. Byrd-McPhee who gave a workshop at the Flying Steps Academy dance studio in Berlin-Kreuzberg, also participated in the Long Night of Libraries at Berlin’s City Library where she performed and gave an impromptu workshop engaging the audience. During the “open house” event, the library offered a variety of different cultural programs – from traditional library tours to literature readings to Michele’s Hip Hop performance.

As the executive director and founder of Ladies of Hip-Hop Festival, Michele has danced in music videos, battled in the club scene and traveled along as the Hip-Hop dance culture exploded onto stages, in studios and in theaters. Being one of the few women dancing alongside groups of men, she became increasingly aware of the narrow opportunities for women in Hip-Hop. Her experiences as a woman in Hip-Hop dance were the catalyst for her to create an outlet for female dancers. Michele created a neutral zone where the art does not get lost; a safe space where living one’s dream can be celebrated. Michele passed on this dream to the young people she encountered during her Germany-wide tour that took her to Frankfurt, Nuremberg, Hamburg and Berlin.