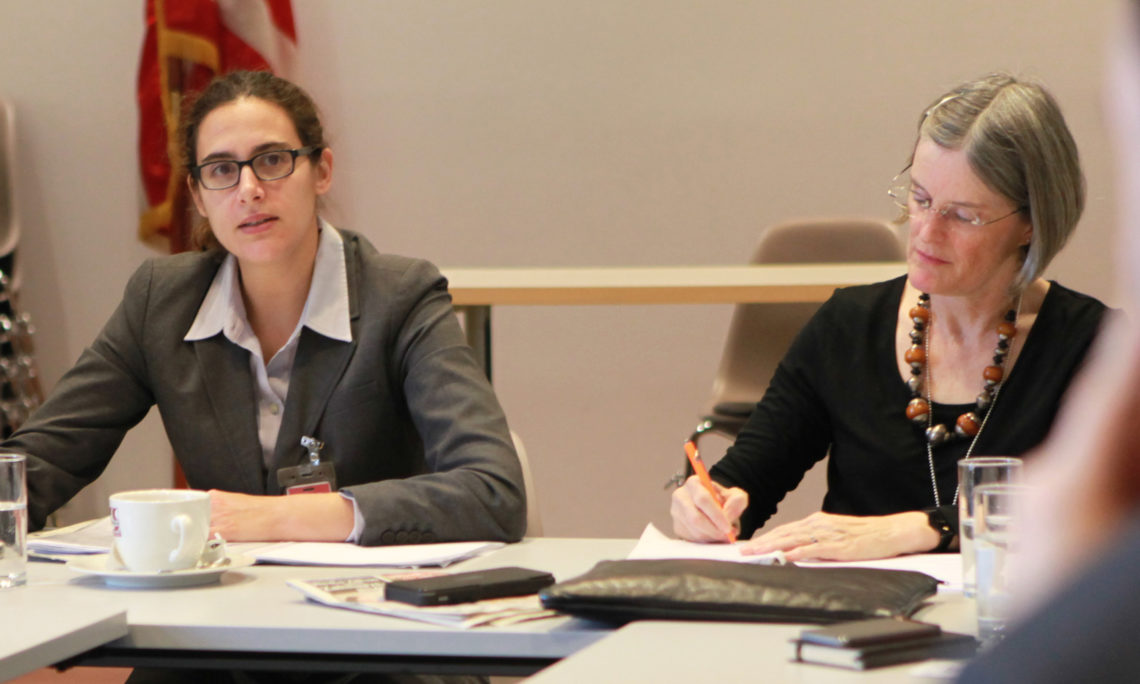 On November 4, Dr. Nikki Usher, Assistant Professor at the School of Media and Public Affairs, George Washington University,  visited several newspapers in Berlin and met with many German journalists and bloggers to discuss “making news in the digital age.”

In the morning she met with German bloggers at the embassy and discussed “the relationship between blogging and traditional media in the U.S. and how to facilitate integration – or not.” Dr. Usher outlined the close collaboration between bloggers and journalists in the U.S. Bloggers started to become more known in the U.S. in the 2000s. In general, they were already influential journalist before they became bloggers. Today the niche blogs are the most successful blogs in the U.S.  For example, the content provided by the SCOTUSblog covering the gay marriage decision of the Supreme Court was used by every media outlet in the U.S.

In the late morning Dr. Usher went on to a Berlin daily newspaper to discuss “how to promote cooperation between online and print staff.” She pointed out how important it is to have the online and print staff work together in one newsroom – and to pay both the same salary- in order to integrate the two.  Both print and online content need to be presented to the reader based on strategic decisions. Dr. Usher stressed that long, detailed, well-written stories still interest the readers, both print and online readers.

In the midday, she visited another Berlin daily where she talked about “Insight from America: How immediacy, interactivity and participation change the newsroom.”

In the afternoon, Dr. Usher gave an interview to a German national daily based in Berlin.  She explained how she often finds a lack of strategy for the online products of a newspaper, but that analytics show that good content is still rewarded. For Dr. Usher authority of journalism is established through amazing experience. She cited the example of an online article of the New York Times “The Lonely Death of George Bell” in which the author very detailed described the lonely death of a hoarder.  Dr. Usher perceives this article as a good example for the “personalizing of the content experience” which is the key to attracting readers.

In this video Nikki Usher answers our questions on the future of the news media: