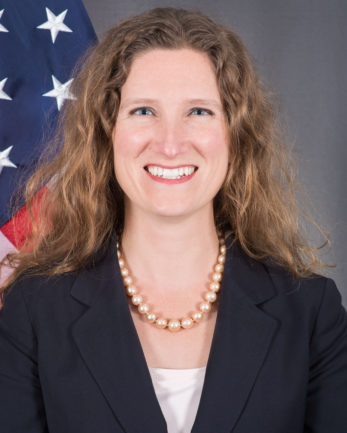 Fiona Evans assumed her duties as Consul General in August 2018. Before her arrival in Düsseldorf, she was Information Officer and Press Attaché in Nairobi, Kenya from 2016 to 2018.

Prior to this, from 2013 to 2016, she was Deputy Cultural Affairs Officer at the U.S. Embassy in Berlin where she also served on the board of the Fulbright Commission.

Her first diplomatic overseas assignment was as a Vice Consul in Lima, Peru from 2001 until 2002 followed by an assignment as Public Affairs Officer and Consular Officer in Dushanbe, Tajikistan.

From 2003 to 2005 she served as Political Officer in Pristina, Kosovo and from 2006 to 2009 as Economic and Commercial Officer in Reykjavik, Iceland.

From 2010 to 2012 she was Transportation Officer and Deputy Director of the Aviation Negotiations Office at the State Department in Washington, DC.

She grew up in New England and has German roots in North-Rhine Westphalia.