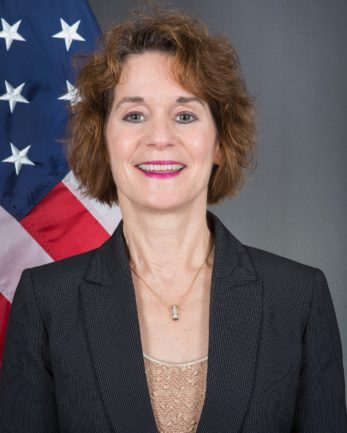 Patricia Lacina currently serves as Consul General at the U.S. Consulate in Frankfurt, Germany. She is a career member of the Senior Foreign Service, Class of Minister-Counselor, with 29 years of experience in diplomacy, management, and policy coordination.

Previously, she served as Principal Deputy Executive Secretary in the Office of the Secretary of State.  In this capacity, she was responsible for overall policy and management coordination in the Executive Secretariat. From 2013 to 2015, she served as Deputy Chief Information Officer for Business, Management and Planning and Chief Knowledge Officer.  Patricia’s overseas assignments include Management Officer in Cairo, Deputy Director of Frankfurt’s Regional Support Center, and Director of Human Resources in both Vienna and Brussels.  She has also completed tours in Buenos Aires, Nairobi, Moscow, Bogota, and Mexico City.  Domestically, she also served in the Bureau of International Organizations Affairs as the Office Director of Global Systems.

Patricia holds a B.A. in Special Education and Spanish from the University of Northern Iowa and an M.A. in International Affairs from California State University at Sacramento.  Originally from rural Iowa, Patricia is married to Carlos Zapata, who is also a member of the Foreign Service and is currently serving in Milan, Italy.  Her daughter is a student at the University of Pennsylvania in Philadelphia.