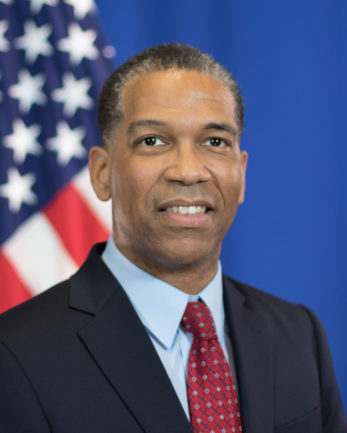 Consul General Darion Akins arrived in Hamburg in July 2019.  He is a career Foreign Service Officer, and the Ambassador’s representative to the German states of Hamburg, Lower Saxony, Bremen, Schleswig-Holstein, and Mecklenburg-Western Pomerania.

Before his assignment to Germany, Darion was in the Executive Office for the Bureaus of European and Eurasian Affairs and International Organization Affairs, where he oversaw the staffing of U.S. diplomatic missions in Europe and multilateral organizations, such as the U.S. Mission to the United Nations (USUN) in New York, the North Atlantic Treaty Organization (NATO), U.S. Mission to the European Union (USEU), and the Organization for Security and Co-operation in Europe (OSCE).  Prior to his Washington assignment, he served in Malaysia, India, Afghanistan, Australia, and Indonesia.

Darion holds a Master’s Degree in National Security Strategy from the National War College in Washington, D.C., and is also a graduate from Texas A&M University, where he studied Political Science and Business.  He co-founded the National War College Alumni Association at the U.S. Department of State, and served as the organization’s President for two years.

Prior to joining the Foreign Service, Darion developed and implemented microfinance and income-generation projects in Zambia as a Peace Corps Volunteer.  While working for a private firm in Japan, he met his spouse.  Together, they have one teenage son.  Darion’s language experience includes German, Japanese, and ChiNyanja.