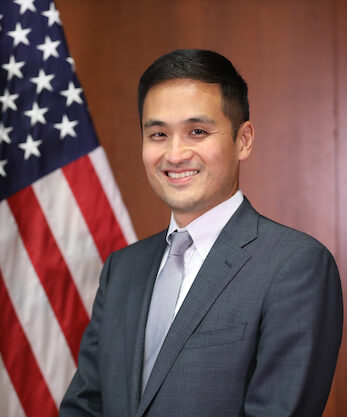 Kenichiro (Ken) Toko assumed duty as Consul General for the U.S. Consulate General in Leipzig, covering the states of Saxony, Saxony-Anhalt, and Thuringia, in August 2020.

Previously, Ken served as Acting Deputy Director and Senior Germany Desk Officer of the U.S. Department of State’s Office of Western European Affairs.  From 2014 to 2017, he worked as Deputy Political Counselor at the U.S. Embassy in Kyiv.  Prior to serving in Ukraine, he was Political-Military Affairs Officer and Deputy Political Internal Unit Chief at the U.S. Embassy in Tokyo.  Ken has also served as Special Assistant in the Department’s Bureau of Intelligence and Research and as Consular Officer at the U.S. Consulate General in Shanghai and the American Institute in Taiwan.

Prior to joining the U.S. Department of State in 2003, Ken worked in External Relations at the Sony Corporation in Tokyo.  He holds a Master of Science in Foreign Service from Georgetown University, Washington D.C., and a Bachelor of Arts in East Asian Studies from Columbia University, New York.

Ken speaks English, Japanese, Chinese (Mandarin), German and Ukrainian.  He was born in New York City and is married with four kids (three sons, one daughter).