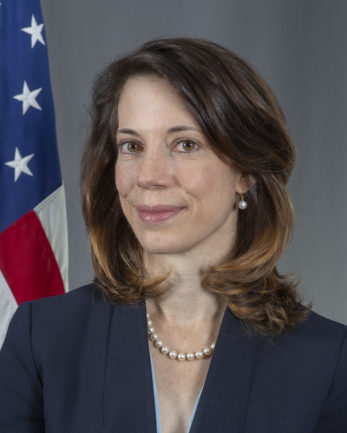 Meghan Gregonis is the United States Consul General in Munich since July 2018. Previously, she was Deputy Director for Public Diplomacy in the State Department’s Bureau of European and Eurasian Affairs where she oversaw, broadened, and resourced Public Diplomacy engagement in Western Europe. In this capacity she also coordinated U.S. efforts to counter disinformation in Europe.

Prior Washington assignments include the National Security Council at the White House where she directed the U.S. government’s engagement on Turkish affairs from 2012-2013. At the State Department, Meghan has coordinated U.S. policy from the European and Near Eastern Affairs Bureaus. She led the State Department’s team of officers advancing relations with Turkey as the Senior Turkey Desk Officer (2010-2012) and led the Department’s efforts on Jordanian relations as the Jordan Desk Officer (2008-2010).

Previous overseas assignments include Islamabad, where she directed the State Department’s largest overseas media office and served as Embassy Spokesperson from 2013-2014. She also served as Embassy Spokesperson and Press Unit Chief in Riyadh from 2007-2008. Earlier assignments include rotational officer and Special Assistant to the Ambassador in Rome from 2004-2007; Press officer in Baghdad in 2003; and Cultural Attaché in Jerusalem from 2002-2004.

Meghan is a distinguished graduate of the National War College and is a graduate of New York University. She completed graduate business studies at Temple University before joining the State Department in 2001. Meghan is also an alumna of Massachusetts Institute of Technology’s Seminar XXI program, a professional program for current and future leaders in the U.S. military, foreign policy, and national security fields.

Prior to joining the Foreign Service, Meghan developed businesses at a venture capital company in her hometown of Philadelphia. Her languages are German, Italian, French, and Arabic. Meghan and her husband, Dr. Alessio Volante, are avid cyclists.