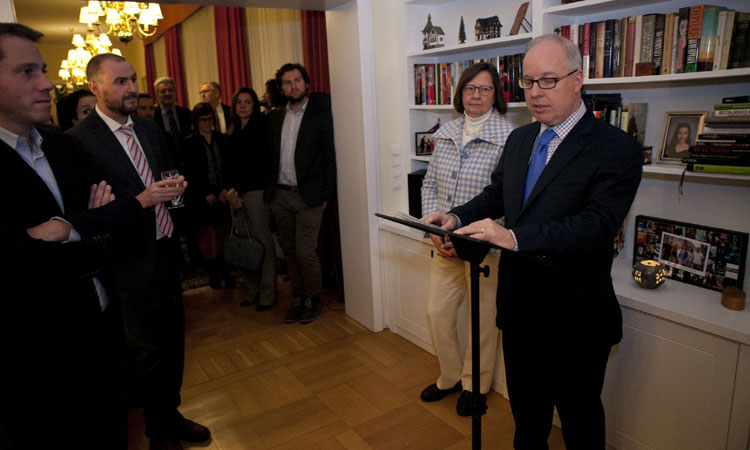 As prepared for delivery.

Michelle and I are very happy to welcome you all to our residence for the Embassy’s annual intercultural reception.

Traditionally this reception is a celebration of Martin Luther King, Jr. Day. That is also the case this year, even though we are a little bit late. The holiday is observed on the third Monday of January each year. Well, we are already into February – which means that this evening, we are also celebrating the beginning of Black History Month, a national observance that started in 1976, America’s bicentennial year, honoring the too-often neglected accomplishments of black Americans in every area of endeavor throughout the history of the United States.

But most important, this reception is an opportunity to commend you, the representatives of German religious, civil society, and government, for your work in furthering the vision of tolerance, diversity, equal rights and freedom that the legacy of Dr. Martin Luther King, Jr. symbolizes. Dr. King believed in encouraging people of all ages, races, and genders to engage in open-minded dialogue with people from all different circumstances and backgrounds.

We have partnered with many of you on projects that reflect that basic vision of human rights, initiatives that help people to move beyond religious and cultural differences. And so this reception is also an opportunity to thank all of you for your commitment, your creativity, and your partnership – over the past year, and also as we move forward.

In that context, I would like to acknowledge the concerns that some of you might have. We understand that many people here in Germany and in other countries are uneasy about some of the Trump Administration policies. In the past few days, we have witnessed the emergence of an energetic debate in our nation about recent provisional actions regarding security concerns and travel to our country. In an era of increasing global threat of terrorism, this is an issue that successive American presidents have had to address. The Trump Administration takes its responsibility to safeguard the American public very seriously. The Administration’s move to review and strengthen the U.S. vetting processes related to visa issuance and acceptance of refugees is designed to address the concerns many Americans expressed during the election campaign. As the administration works through a re-evaluation of procedures, you will continue to witness the vibrancy of democratic debate in America. My fellow countrymen will continue to express various points of view on how to best secure our nation while also maintaining those long-standing U.S. values that are the foundation of the past, the present, and the future of the American story.

As the new Secretary of State Rex Tillerson said in his testimony before the Senate Foreign Relations Committee: “Our values are our interests when it comes to human rights.”

Promoting freedom and democracy and protecting human rights around the world are central to U.S. foreign policy. The values captured in the Universal Declaration of Human Rights and in other global and regional commitments are consistent with the values upon which the United States was founded centuries ago.

On the first observance of Martin Luther King Day in 1986, President Ronald Reagan recalled those universal values. “[This is a day],” he wrote, “for rejoicing and reflecting. We rejoice because, in his short life, Dr. Martin Luther King, Jr., by his preaching, his example, and his leadership, helped to move us closer to the ideals on which America was founded. We reflect on his words and his works… He challenged us to make real the promise of America as a land of freedom, equality, opportunity, and brotherhood.” And this year, then President-elect Donald Trump, called on Americans, in observing Martin Luther King Day, to “celebrate all of the many wonderful things that he stood for.”

The United States has been, and continues to be, shaped by the energy created when people from different cultures, regions, races and faiths come together to build better lives for themselves and their children. Not only our diversity, but also our ability to overcome and solve the challenges posed by integration, has been our strength.

In the United States and here in Germany, we can be proud of the enduring ideals that define our countries and the liberties we have at great cost secured.

Thank you again for joining us this evening.