Shielded by four floors of office spaces on all sides, the courtyard inside the U.S. chancery is an oasis of peace and quiet in the midst of Berlin’s busy center. Apart from various North American plants, it also harbors a number of noteworthy artifacts:

The Embassy courtyard features Ellsworth Kelly’s Berlin Totem; a segment of the Berlin Wall (photo | listed in Wikipedia); the founding stone for the Chancery; and a memorial stone to the German victims of the 9/11 attacks (photo | remarks at unveiling).

On the occasion of the tenth anniversary of the terrorist attacks of September 11, 2001, the U.S. Embassy in Berlin has added a piece of one of the steel girders of the Twin Towers to a memorial in the garden courtyard of the Embassy commemorating the thousands of victims of the attacks, including the eleven German victims. 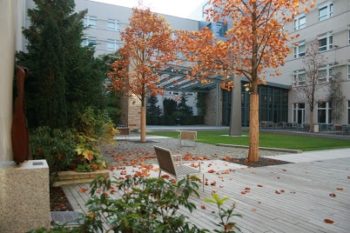 Embassy Courtyard with the 9/11 memorial

The World Trade Center artifact is part of a steel beam recovered after September 11, 2001.  It was provided to the Embassy courtesy of the Port Authority of New York and New Jersey at the request of U.S. Ambassador Philip D. Murphy and Mrs. Tammy Murphy.  It is displayed in memory of the thousands of victims of the attacks, “including 343 New York City Firefighters, 37 Port Authority Police Officers, and 23 New York City Police Officers.”

The original 9/11 memorial in the Embassy’s courtyard garden was unveiled on September 11, 2008 during a private ceremony, hosted by then-U.S. Ambassador William R. Timken, in the presence of families of the German victims; Jay M. Cohen, Under Secretary of the U.S. Department of Homeland Security; and Germany’s Ambassador to the U.S. at the time, Dr. Klaus Scharioth.

The new memorial stone, incorporating the World Trade Center artifact, was unveiled Monday, September 12, in an in-house ceremony attended by Ambassador and Mrs. Murphy and staff of the U.S. Mission to Germany.