John B. Emerson was confirmed by the United States Senate on August 1, 2013 as U.S. Ambassador to the Federal Republic of Germany and presented his credentials to German President Joachim Gauck on August 26, 2013. He and his family arrived in Berlin on August 15, 2013.

Ambassador Emerson was the 2015 recipient of the State Department’s Sue M. Cobb Award for Exemplary Diplomatic Service, which is given annually to a non-career Ambassador who has used private sector leadership and management skills to make a significant impact on bilateral or multilateral relations through proactive diplomacy. 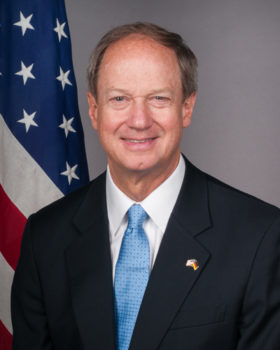 Mr. Emerson was the President of Capital Group Private Client Services from 1997 to July 2013. Capital Group is one of the world’s largest investment management firms, with more than one trillion dollars in assets under management. Previously, Mr. Emerson served on President Clinton’s senior staff, from 1993-1997. He served as Deputy Director of Presidential Personnel, and subsequently as Deputy Director of Intergovernmental Affairs, where he was the President’s liaison to the nation’s governors. Mr. Emerson also coordinated the Economic Conference of the Clinton-Gore transition team and led the Administration’s efforts to obtain congressional approval of the GATT Uruguay Round Agreement in 1994, and the extension of China’s MFN trading status in 1996. In 2010, President Obama appointed Mr. Emerson to serve on the President’s Advisory Committee for Trade Policy and Negotiations.

Before joining the Clinton administration, Mr. Emerson served as the Los Angeles Chief Deputy City Attorney (1987-1993), during which he was selected by the Friedrich Ebert Stiftung and the American Council on Germany to visit Germany as part of an American-German delegation. Before that, he was a partner at Manatt, Phelps & Phillips, specializing in business and entertainment litigation and administrative law.

Mr. Emerson has been active in civic affairs and has been director of a number of non-profit organizations in Los Angeles, as well as a member of the Pacific Council on International Policy, and the Council on Foreign Relations.  Mr. Emerson, originally from the suburbs of New York City, earned his Bachelor of Arts in Government and Philosophy from Hamilton College and his Juris Doctor from the University of Chicago. More recently a resident of Los Angeles, he is married to Kimberly Marteau Emerson, who served in a senior role at USIA in the Clinton Administration and currently serves on several civic and non-profit boards, pertaining to human rights and public diplomacy. Both Emersons have a deep German heritage, beginning with their grandparents. They have three daughters.