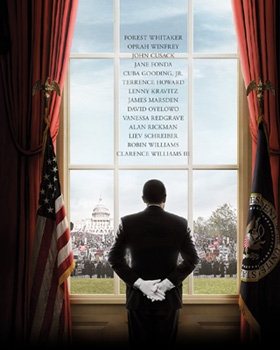 Preview of The Butler

One day before the official German release date, the U.S. Embassy invited 250 high school students to an exclusive advance screening of THE BUTLER at the Hackesche Höfe cinema.  The movie, directed by Lee Daniels, had been critically acclaimed in the U.S.  Among the invited guests were also teachers, film studies professors as well as North American studies experts.  The exclusive movie preview was made possible through the support of the distributor, PROKINO Filmverleih, and the Filmpresse Meuser.

Based on the true story of the butler Eugene Allen, THE BUTLER tells the story of Cecil Gaines (Academy Award winner Forest Whitaker), who served in the White House during seven presidencies – from 1957 to 1986 – and witnessed the writing of world history and the U.S. civil rights movement.  At an advanced age, he finally experiences his biggest triumph:  an African-American becomes President of the United States of America.  Lee Daniels’ film is already said to be an Oscar® favorite.