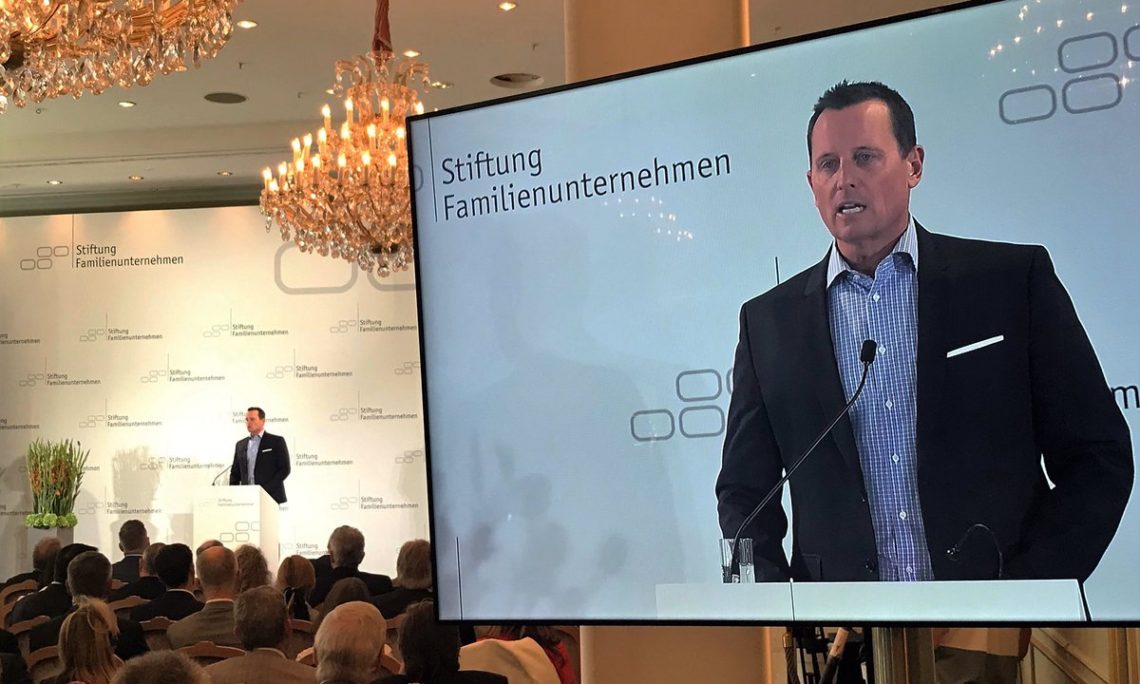 Remarks for Ambassador Richard Grenell
at the Stiftung Familienunternehmen

“Putting the Transatlantic Economy on a Free and Fair Footing”

Thank you for that kind introduction. Let me start by thanking the Family-Owned Business Association for having me here to talk about the transatlantic economic relationship. Events like this allow us to exchange ideas on how to bring about real change to areas where the status quo has become ineffective.

The free trade system that America helped create after World War II lifted millions of people out of poverty. It also increased the vitality of the American economy. Free trade has led to lower prices, greater variety, better quality, faster growth, and dynamic innovations. It has allowed American businesses to thrive in the current era of 3% growth. And it has enabled family-owned businesses, such as your own, to play a leading role in strengthening the German economy.

More than 90% of German companies are family businesses, and they provide almost 60% of all jobs in Germany. In the U.S., family businesses account for 64% of our GDP, and 78% of all new jobs. One thing is clear: Family-run businesses are the biggest source of growth when times are good, and a force for stability when times are hard.
In addition to the economic benefits of free trade, there is also a moral argument: Free trade is inherently fair, it benefits both trading parties, and it naturally allocates limited resources better than any government could. We know, too, that capitalism has done more to combat poverty and raise living standards than any other system – ever. There should be no debate about this.

U.S. companies employ hundreds of thousands of Germans, and German companies like DHL, Linde, Fresenius, T-Mobile, and countless Mittelstand companies employ hundreds of thousands of Americans. Even the great German airline Lufthansa has created 10,000 U.S. jobs. As Chancellor Merkel pointed out yesterday in Osaka, German Foreign Direct Investment into the U.S. has also grown. Chancellor Merkel is absolutely right—German investment into the U.S. grew by 9% from 2016 to 2017. Americans are thankful for the growth opportunities provided to us by the great German companies, which have thrived under the economic leadership of Chancellor Merkel.

Let me be clear on America’s goal: President Trump wants freer and fairer trade. And he’s willing to take the necessary short-term steps to reach that goal.

We all know that the current trade system is neither free nor fair. And the Trump administration is willing to challenge the status quo.

The facts speak to this imbalance: Europe imposes higher tariffs than the United States on a broad array of key products, including cars and agricultural goods. Other U.S. products never make it to European markets due to arbitrary regulations. Just look at cars, where the EU imposes a 10 percent tariff, compared to just a 2.5 percent tariff in the United States. Why should the tariffs Germans pay on a Ford Mustang be four times higher than the tariff Californians pay on a BMW?

And in the agriculture and food sectors, the EU’s average tariffs are double those of the United States. EU tariffs on butter, for instance, are 15 times higher than they are in the US.

This is why the U.S. has a goods trade deficit of $69 billion with Germany, and $169 billion with the EU.
Just as damaging are the non-tariff barriers that limit competition from outside the EU. Well-intentioned but arbitrary rules limit trade and prevent innovation. These restrictions harm U.S. exporters across a wide variety of sectors, ranging from chemicals to cosmetics to wine.

Let me ask a simple question: when you last visited the United States, did you worry about the safety of the vehicle you rented or the food you ate? I bet not.

And more importantly to all of you – some EU regulations hurt not only U.S. businesses, but European businesses and consumers as well.

I’ve spoken to the CEOs of many German and American companies, and they consistently tell me that they are being squeezed by bad and misguided government demands, many of which start or end in Brussels. Brussels’ red tape is chasing businesses out of Europe. And this is not just a European problem. It is also an American concern. The United States wants to achieve 4% growth, but that won’t happen if our partners in Europe continue to hamper their own growth. The U.S. wants European businesses to thrive because it directly affects us.

For example, new EU regulations on medical devices are slated to come into effect next year. While well intended, the regulations will require that all devices be re-certified. But the EU has not yet issued all of the guidelines necessary to comply with the new regulations. So companies are required to re-certify products – but still don’t know how to do it.

What’s more, there are not enough institutes qualified to certify new and existing devices. That’s because each institute must itself be re-approved. Only then can they start certifying the thousands of devices waiting – with less than a year until the deadline.

If nothing changes, there will be a considerable backlog in certifications, and thousands of safe and effective treatments could become unavailable. A cardiac patient who needs a pacemaker could suddenly find that it’s no longer available.

Here we have a case of regulatory disruption that could prove harmful. The situation is untenable from a patient perspective, to say nothing of the higher costs and the drain on innovation that will likely result. Those of us who believe in capitalism and freedom must create a fairer transatlantic market with more sensible regulations. This kind of reform is necessary not only for our own prosperity. It will enable us to take on external challenges together.

By far the biggest challenge our private sectors face is unfair competition from China. 18 years ago, we invited China into the WTO on the assumption that doing so would have a liberalizing effect on the Chinese economy. Instead, Chinese companies and the Chinese state habitually abuse the rules. Since joining the WTO, China has unfortunately leveraged the dispute settlement system to give itself an unfair advantage over Europe, the United States, and other market economies.

Chinese actors use a variety of coercive practices to steal the cutting-edge technology of European and American businesses. Beijing provides market-distorting subsidies to its own companies. It engages in rampant theft of intellectual property. And it maintains restrictive local content requirements. These practices harm U.S. and EU workers and businesses.

I’m from Los Angeles, where China has been undermining Hollywood production companies for decades. On the one hand, media and production houses want to expand into the Chinese market. But on the other, they are regularly confronted with box office fraud and outright piracy.

And Germany is not immune from these challenges. Earlier this year, Taiwanese authorities arrested a group of engineers from the local subsidiary of BASF for stealing and transferring the company’s technology to a Chinese rival. The Chinese company reportedly paid the engineers almost $6 million for stealing BASF’s technology.

This is just one in a series of cases in which Chinese companies have been accused of extracting technology from multinational companies. And we are concerned that the WTO is not yet equipped to handle the fundamental challenge posed by China.

But there are some signs that change may be coming.

In January 2019, top trade officials from the U.S., EU and Japan announced progress in addressing China’s unfair trading practices. They now aim to draw up new rules at the WTO.

As you can see, economic policy and security policy cannot be separated. When governments make decisions on trade, on energy, or on telecommunications infrastructure, they are not just making economic decisions. Don’t let anyone tell you that a Russian gas pipeline, or Chinese 5G equipment, have nothing to do with your security.
These are all issues of great importance to both U.S. and German businesses. And it shows the value that we bring when we work together.

In closing, I want to emphasize that the transatlantic relationship remains strong. Of course we have our differences, just as we always have and always will. But we continue to share the same values and the same goals. Trade has always been fundamental to our relationship. As our dynamic societies and economies have continued to evolve, it only makes sense that we must review – and adjust – the rules of our free trade system to ensure that it continues to serve all of our interests.

Americans and Germans are friends because we both value hard work, prosperity, and opportunity. That is why our economies are the envy of the world. It is our responsibility to ensure that we continue to grow together.

Suggested for You
TwitterFacebook