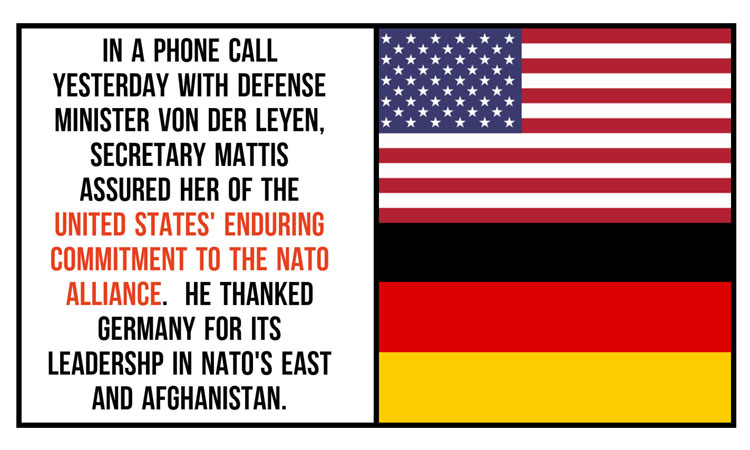 Pentagon Spokesman Capt. Jeff Davis provided the following readout:
Secretary of Defense Jim Mattis spoke today by telephone with German Minister of Defense Ursula von der Leyen to introduce himself and exchange perspectives on defense security issues with one of our closest allies. The two leaders discussed the importance of the alliance between the United States and Germany, both bilaterally and as members of NATO. The secretary assured the minister of the United States’ enduring commitment to the NATO alliance. He thanked Minister von der Leyen for her country’s leadership in NATO activities on the Eastern Flank and in Afghanistan, and acknowledged the role that Germany plays in fighting terrorism, specifically in the counter-ISIL coalition. He also cited the strategic importance of Germany as the host to 35,000 U.S. personnel, the largest U.S. force presence in Europe. Both pledged to consult in the months to come and look forward to working together at the Munich Security Conference in February.