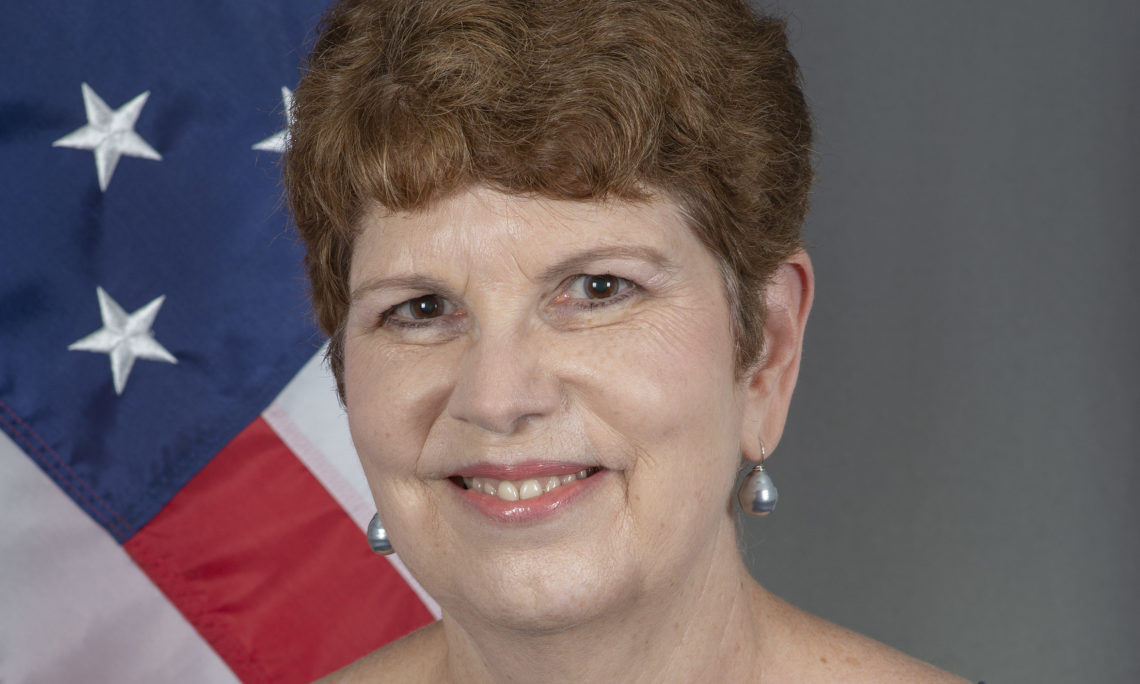 I’m honored to be in Roetgen today – in this small town with a big role in Germany’s history.

Standing here, we can see why Roetgen’s geography made it a crucial transit point from its very earliest history.  In our time, it meant that the people of Roetgen witnessed some of the fiercest battles of the war.  The first city in Germany liberated by the United States, Roetgen was, in September 1944, suddenly in the spotlight for Americans across my country.

The liberation of Roetgen marked a crucial step.  American authors – including Ernest Hemingway, then a wartime correspondent, who covered the battle of Huertgen Forest – sent reports of hardship and sacrifices to America’s living rooms.

Why?  Because for many Americans, what happened here – in Roetgen, in Germany — was intensely personal.  Our soldiers came from across America, dedicated to one goal: liberating Europe from dictatorship, and giving it a democratic future.  They – and their families –all knew it would not be easy.

So many American families have stories of loss and remembrance from the war.  I’d like to remember one today:  the story of U.S. Army Lieutenant Richard Spencer Burrows.

He’s grown up in the town of Ogden, going to college and working in a local market.  He enlisted in the Army after the attack on Pearl Harbor.  His picture shows him confident, proud – with a smile as wide as the great outdoors.  It engages us, even in grainy black and white newsprint, to return a smile.

He said good-bye to his family, including his eight year old daughter, and came to join the fight in Europe.

And, as American forces moved past Roetgen, Burrows stepped out of his tank briefly to find out what was blocking the road.  He was killed by a sniper.

Richard Burrows was lost to his young family.  But he is not lost to history.

Through the work of Richard Burrows’ relatives – some of whom are here today – along with a local historical society, his name is engraved on a monument here.

It is next to the name of a German soldier who also died that day.

What a remarkable testament to our post-war values.  In 1945, few might have imagined such a memorial to shared loss.

Let’s stand in that historic moment for just a minute.  There was no certainty for the American soldiers coming to Roetgen, and heading to the next field of battle.  And surely, there was uncertainty among the people who lived here.  What would happen next?

What happened was:  we rebuilt our transatlantic relationship, becoming NATO Allies.  Just this summer, our Embassy in Berlin celebrated the 70th anniversary of the Luftbrucke, which – in a remarkable political and logistical commitment – showed the world our support for a free Berlin.  It was just three years after the war ended.

And this year, we will also celebrate 30 years since the fall of the wall – leading to the reunification of our partner, Germany.

Our strong transatlantic relationship results from the work of generations.  It is why we invest in this relationship every day – to ensure it is carried into the next generation.

For those soldiers in 1945, I’m one of the next generation.  Would they have imagined that, 75 years later, a woman from a small town in California – with a French name, who studied German – would stand here, linking the past to our shared future?

Seventy-five years ago, on this spot, everyone faced an uncertain future.  But what we do with the future is our choice.  We choose a transatlantic partnership with Germany.