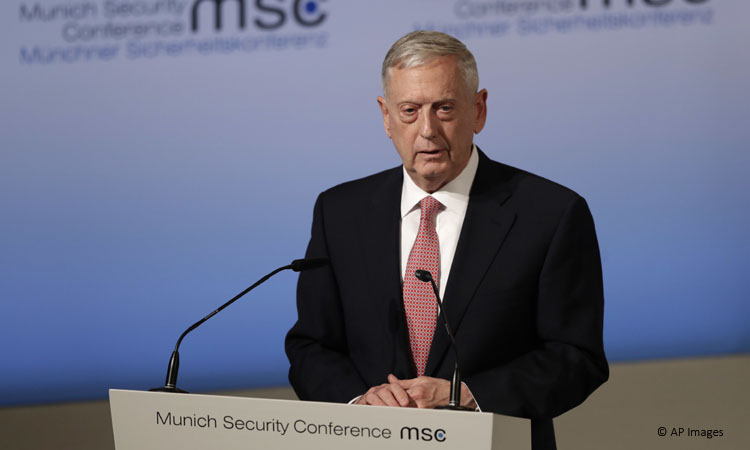 Thank you very much.  Thank you.  And excellencies and colleagues, ladies and gentlemen, good afternoon.

And thank you, Madam Minister, for your historically informed and stirring words.  They remind me of the legacy now shared on both sides of the Atlantic.  It’s a legacy of freedom, it’s a legacy of friendship and a trusted alliance.  With the ingrained respect that two democracies share for each other and the trust we share with 26 other democracies in the NATO alliance, your words highlight our enduring transatlantic bond.

I’m grateful to be among so many leaders in our democracies as we forge our path ahead.  This is how we build approaches to working together for a peaceful and prosperous future.

When it comes to security, no one goes their own way in this world alone.  Security is always best when provided by a team.  So it’s a particular honor for me to be here with Minister von der Leyen.  Ursula and I met last week in Washington where we had an excellent in-depth discussion about the security situation facing not only our nations and the alliance, but the broader global community as well.

In this regard, I have great respect — I must put in here — for Germany’s leadership in Europe and for the ethical performance of their professional troops on the battlefield.

Like many of us, we just came from Brussels, where we participated in the NATO defense ministerial.  There I found the transatlantic bond strong and my fellow defense ministers under no allusions about the threats to our nations face together, and Article V is a bedrock commitment.

Transatlantic unity buttresses European unity, a fact that we recognize in the context of cooperation between NATO and the European Union.  The United States welcomes improvements to defense cooperation in Europe, those that increase capabilities and make European defense more efficient without lessening NATO interoperability.  The NATO-E.U. joint declaration signed in Warsaw reflects the reality that American security is permanently tied to the security of Europe.  Done correctly, European initiatives and NATO unity are mutually reinforcing.

Standing on the bedrock of our NATO alliance, 28 democracies help preserve the rules-based international order, serving to keep the peace and to defend shared values that grew out of the enlightenment.  I was heartened by the appreciation of our European allies for the increased threats we face and appreciation that was consistent around the table in Brussels.  The allies recognized 2014 as a watershed year and we could no longer deny reality.

As guardians for our nations and as sentinels for new threats, we all see our community of nations under threat on multiple fronts as the arc of instability builds on NATO’s periphery and beyond.  Unified by these growing threats to our democracies, we possess strong resolve.  We’re going to adapt the alliance.  And now comes the hard part, as Ursula said, and that’s the — as prudent dictates, moving forward together, reinforcing deterrence and defense and more directly addressing terrorist threats along NATO’s southern flank, from the Mediterranean to Turkey’s border.

NATO has only two supreme allied commanders.  Such is the importance NATO places on adaption that one of those two commanders is assigned the sole mission of charting NATO’s constant transformation.  Supreme Allied Command for Transformation is the only NATO headquarters in the United States.  Commanded by a four-star French general, he leads some of the best strategic thinkers from our nations drawn from all the nations, and this demonstrate the level of importance that we in NATO place on adapting the alliance to new threats such as terrorism, cyber threats and hybrid war.

We are engaged as we speak to ensure the alliance is relevant and fit for its time.  The United States is moving units into the Baltic states, Poland, Romania and Bulgaria, under Operation Atlantic Resolve.  And we joined the United Kingdom, Germany and Canada, nations leading our combined forward presence forces, as Ursula mentioned, in Poland and the Baltic states and this is a wholly defensive deployment to maintain deterrence.

To confront the threats facing our alliance, we must recognize not just strategic realities, but also political realities.  President Trump came into office and has thrown now his full support to NATO.  He too espouses NATO’s need to adapt to today’s strategic situation for it to remain credible, capable and relevant.

Further, as Minister van der Leyen noted last week, it is a fair demand that all who benefit from the best alliance in the world carry their proportionate share of the necessary costs to defend our freedoms and we are committed to passing those freedoms in tact to the next generation.

The message I delivered in Brussels was expected.  It was well received by my fellow defense ministers, as you heard a moment ago, and aligned with the message of Secretary General Stoltenberg.  I stand here with you, I’m confident that our alliance will be unified in meeting today’s security challenges and I’m also confident that the alliance will adopt a plan this year, including milestone dates, to make steady progress toward meeting Warsaw and Wales commitments to carry our fair share of the security burden.

Ladies and gentlemen, the transatlantic bond remains our strongest bulwark against instability and violence.  NATO exists to protect our way of life, to include the free exchange of ideas that characterizes this annual conference in one of the world’s great cities.  Here, I am confident that we will strengthen our partnerships, confronting those who chose to attack innocent people or our democratic processes and our freedoms.

Thank you very much for having me with you today.  Thank you.