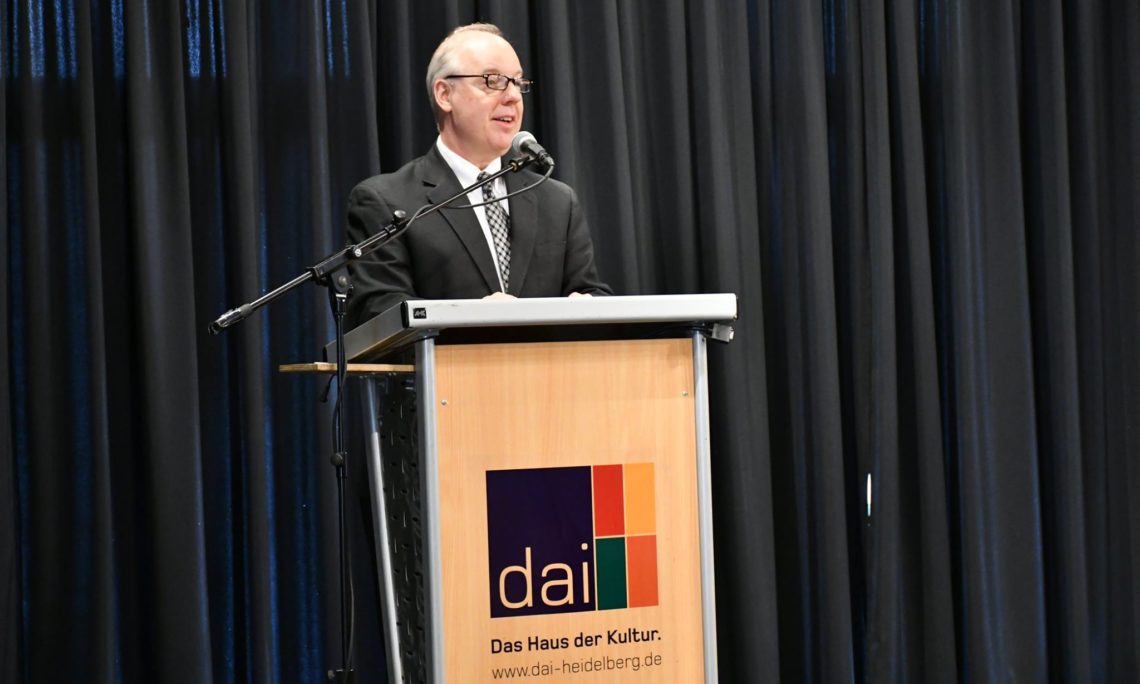 Thank you, Jakob, for giving me a few minutes to greet the participants of this ambitious and important forum.  I commend you all for giving up a weekend to discuss some of the most important issues affecting not only the future of journalism, but also the vitality of our civic societies.

I would also like to commend the DAI Heidelberg and the Deutsch-Amerikanisches Zentrum or DAZ in Stuttgart for spearheading this program on behalf of the network of German-American Institutes, or DAIs.  Jakob, to you and your team – Ingrid Stolz, Nik Mariani, Vanessa Wagner, Jasper Schmidt – thank you.   And to Christiane Pyka, the director of the Deutsch-DAZ in Stuttgart and to your team – Anna Loeffler, Pia Herzan, and Andrea Aric  – thank you.  A number of the centers in the network are also represented here today.  I see Friederike Schulte from the Carl Schurz Haus in Freiburg.  Welcome, Friederike.  And thank you all for your hard work.

Most of the speakers here today will be travelling to other cities around the country to lead spinoff sessions at other DAIs.  Here, too, I would like to thank the visiting experts for taking time out of your busy schedules and making the trip over to Germany.  We appreciate your support of the German-American Institutes.

I would also like to thank the city of Heidelberg and all those who support the network of DAIs around the country – at the local, the state, and the government level.

The United States played a crucial role in the establishment of the German-American Institutes at a crucial period in Germany’s early post World War II history.  Established as Amerika Häuser, the Institutes reopened a door to German-American partnership and cooperation.  Throughout the years, the DAIs have helped to continue to build mutual understanding.

Despite the fact that information is now one of the world’s most important and pervasive resources, according to a recent Freedom House report, only 13 percent of the world’s population lives in a country where the press is truly free. Respect for the rule of law, judicial independence, and an open press are sources of strength and stability.  Laws that restrict media operations pose a challenge to international partnerships.  The open, free flow of information is one of the cornerstones of democracy.  That is a fact of history.

Technology, of course, also continuously changes the way in which news and information circulate.  That, too, is a fact of history.  Today, however, we are witnessing a global epidemic of disinformation.  Violent extremists are using new technologies, especially social media, to spread propaganda and attract new recruits.  This global threat is not contained by international borders or confined to any single country or region of the world.  The fight against violent extremism is complex; and something that we all must take very seriously.

The economic realities of the digital age also pose threats to the integrity and independence of the press.  Many journalists and news outlets struggle to sustain operations without resorting to self-censorship or other compromises to generate revenue and financial support.

Some might say that this is due to what they describe as the “post-factual” world we live in. Oxford Dictionary’s 2016 Word of the Year was “post-truth,” defined as “relating to or denoting circumstances in which objective facts are less influential in shaping public opinion than appeals to emotion and personal belief.”  This is not a new concept.  Opinion is often framed by what “feels” true and what correlates with people’s pre-existing set of beliefs, but technology, and in particular again social media, has intensified and accelerated the problem.

Compounding the problem is the work of non-state and state actors who aim not only to disseminate misinformation but also to erode trust in traditional institutions and sources of information.

In this era of hybrid influencing, the range of methods and activities is wide.  We need to do all that we can to act against those who use cyberspace, social media, and other means to advance campaigns of disinformation, subversion, and espionage.  Hybrid tactics have been under discussion since the ISIS campaign in Iraq and the conflict in Ukraine.  And as National Security Advisor, General H.R. McMaster pointed out last month at the Munich Security Conference, the evidence efforts by Russians to interfere in the 2016 U.S. election “is now incontrovertible.”  Russia has also used disinformation to harm and discredit Germany.

Last November, in a speech at the Wilson Center in Washington, Secretary of State Tillerson discussed frankly the “malicious tactics that Russia has often employed against the U.S. and Europe to drive us apart, weaken confidence, and undermine the successes that we have achieved together since the end of the Cold War.”  Launching cyber-attacks and disinformation campaigns to undermine free elections or playing politics with energy supplies, the Secretary pointed out, are not activities that responsible nations engage in.

We are already improving our ability to counter such threats.  Last year, nine countries, including the United States and Germany, established a European Center of Excellence for Countering Hybrid Threats.  The U.S. Department of State has also launched an Information Access Fund to support public and private partners in their efforts to expose and counter propaganda and disinformation.

One thing is certain: our nations are safer when we cooperate to advance shared goals.  We are only as strong as our confidence in our values; and that includes confidence in a resilient and reliable media landscape.

Factual accuracy is a vital component of public trust in journalism.  According to a recent poll (the Media Insight Project, a partnership of The Associated Press-NORC Center for Public Affairs Research and the American Press Institute), 40 percent of Americans say they can recall an incident that eroded their confidence in the media, most often one involving inaccuracies or a perception of one-sidedness.

But what happens when we, as information consumers, do not notice that we are being deceived?   A study by Stanford University showed that students at almost all grade levels cannot tell the difference between fake and real news.  Programs that both cultivate a questioning mind-set and build the skills of information consumers to separate truth and misinformation are vital.  We need to make sure that our young people develop these critical skills.

We all know, however, that young people are technologically savvy and demanding.  They respond to approaches that use gaming technologies and virtual reality to develop smarter ways to build fact-checking skills.  And to prove the point, young people are getting together, downstairs in the DAI’s Makerspace, to participate in a Hackathon and media literacy workshops, parallel to the more formal discussions of this conference.  I think you will be hearing more about some of the tools and projects they are working on later in the afternoon.

This leads me to the broader question of what economic mechanisms – and new tools – might be used to address the challenges and opportunities of Journalism 2.0.  Are there business models that reward honesty and penalize dishonesty?  This, too, is on the agenda for this afternoon.

In short, today’s conference has a very ambitious program.  It is modelled on the State Department’s TechCamp initiative.  TechCamps are participant-driven, hands-on workshops that bring together journalists, NGOs, civil society advocates, as well as the private sector to explore innovative solutions to global issues in these challenging times.  But with challenge comes opportunity; and please, let us not forget or downplay the opportunities and constructive ways we can work together.

I mentioned earlier the problem of disinformation, propaganda, and the potential of social media and other technologies to polarize and divide.  Innovative digital tools are enabling reporters and the public alike to investigate, verify, and distribute factual information to extensive networks.

Yes, the changes we are living through can amplify the power of those who wish to censor and mislead, but this only makes uncovering and sharing the truth more important.  Disinformation and propaganda have a poisonous effect on public discourse and our ability to work together.  Democratic societies are not infallible, but they are accountable – thanks to an open exchange of ideas and an informed citizenry.

Germany and the United States derive their strength from constitutions that guarantee freedom of the press and freedom of opinion. Whether in journalism, literature, the arts, film and television, or research and scholarship, our societies exhibit a great diversity of forms of expression.  The pluralistic nature of our political cultures drives the transatlantic community that we share.

I want to thank all of you for your commitment to that community. Together you bring impressive expertise and a broad diversity of perspectives to this conference.  Jakob, I look forward to hearing all about the proceedings and the conclusions you reach on Journalism 2.0. Unfortunately, as I told you earlier, I cannot stay for the afternoon.

In fact, I have to get back to Berlin for an event with another group of journalists – past and future alumni of the Arthur F. Burns Fellowship Program.   For the past 30 years, the Burns program, named after a former U.S. Ambassador to Germany, has offered young German and American journalists the opportunity to share professional expertise with their colleagues across the Atlantic while working as “foreign correspondents” for their hometown news organizations.

As Chargé d’Affaires, it has been a great honor for me to lead the U.S. Mission to Germany over the past 13 months as we await the arrival of a new Ambassador.  Richard Grenell, a media communications specialist from California, has been nominated to be the next U.S. Ambassador to Germany, but he still needs to be confirmed by the U.S. Senate before he can take up the post.  During my time as Chargé, I have had many opportunities to sit down and talk with journalists – on and off the record.  As you can imagine, there are often no easy answers to the tough questions they pose, but invariably I find these discussions to be stimulating and encouraging.  Why?  Because these interactions show that we care – deeply – about the same issues, even if we sometimes differ in our approach and that we care about the U.S.-German relationship.  I have no doubt that this will be the same today.  Have a great conference.