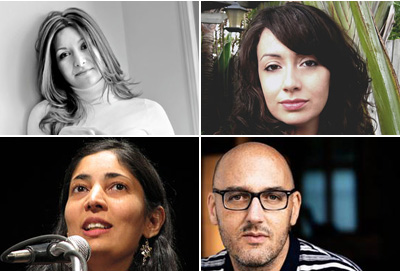 In October, together with mare we brought Dina Nayeri to Germany to present her new novel A Teaspoon of Earth and Sea (Ein Teelöffel Land und Meer, mare). The discussion with the lively author, moderated by Margarete von Schwarzkopf, provided a fascinating look into the immigrant community from Iran and their relationship to the old and the new homeland. Fritzi Haberlandt lent us her German voice. Dina Nayeri also read in Stuttgart, Freiburg, Tuebingen, Hamburg and Munich.

In November, Cuban American writer Jennine Capó Crucet gave us privileged access to her novel-in-progress, Magic City Relic. Jennine Crucet currently serves as Guest Professor for Literature at Leipzig University, a program initiated by the University of Leipzig in cooperation with the German Academic Exchange Service and the Veranstaltungsforum der Verlagsgruppe Georg von Holtzbrinck in 2007. Daniel Schreiber moderated this interesting event. Jennine also read in Leipzig, the home of the Picador guest professorship.

Also in November, a double reading with American Academy fellows Kiran Desai and Ben Marcus, moderated by Gregor Dotzauer, was a special treat. Both attracted a full house, and the discussion with these lively authors reflected upon their very different approaches in their writing.