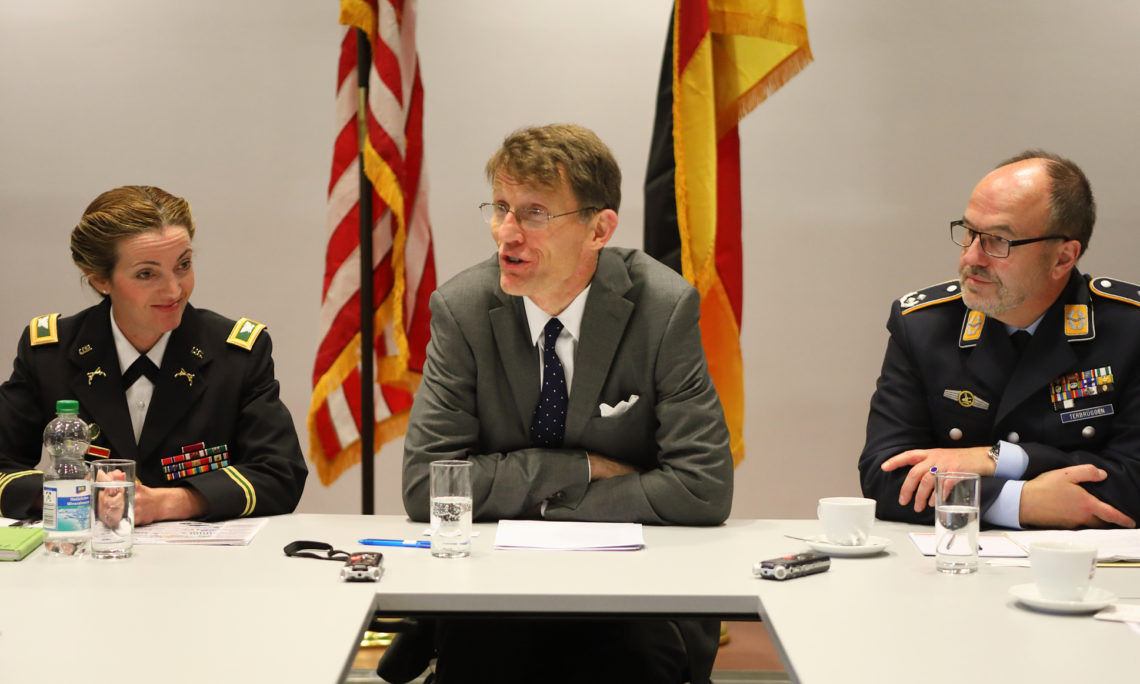 On November 21, Embassy Spokesperson Bill Martin chaired an information session/panel discussion at the U.S. Embassy for German journalists about U.S. military contributions to European security and the important role of troop movements through Germany in fulfilling U.S. commitments to NATO collective defense and deterrence – with U.S. Army Europe Public Affairs Officer Col. Kathleen Turner and German Bundeswehr Joint Support Service Spokesman Lt. Col. Ludger Terbrüggen. As Col. Turner explained, due to Operation Atlantic Resolve (a U.S. mission to which the United States committed at the NATO Summit in Wales in 2014) and NATO’s enhanced Forward Presence (eFP) (which NATO Allies approved at the NATO Summit in Warsaw in 2016), U.S. and other NATO troops and equipment are passing through Germany on a regular basis. In the case of eFP, there is now a robust multinational presence rotating through Estonia, Latvia, Lithuania, and Poland with Germany, Canada, the United Kingdom and the United States serving as the framework nations for those forces. Col. Turner and Lt. Col Terbrüggen stressed the collaborative partnership between the U.S. and German governments and militaries to support each movement under these operations. For example, the Bundeswehr is supporting the troop movements by providing lodging, food, logistical, and medical support to the troops. Col. Turner noted that in the spring and summer of 2018 U.S. and NATO troops will be passing through Germany once again on their way to Poland and beyond to Eastern Europe.

For more information please see the video and the following links below: